My son has become enamored by board games as of late. Simple stuff like Chutes and Ladders, Trouble, and Sorry have become go-to activities in our house, and honestly, I'm all for it. I love board games. Loved them when I was a kid, too. I also have a fascination with retro-video game related merchandise, especially when it happens to come in the form of a board game with wacky original artwork, bizarre pieces, and clever ways of adapting gameplay into something far more analog.

My son't infatuation with board games lead me to clearing out some shelf space in our basement to make his new hobby a little more accessible for him. My wife and I also have a small board game collection that I decided to reorganize as well, and in the process, I wound up with a few extra slots in my shelving unit. My mind immediately saw an opportunity to finally display one of my favorite pieces of my collection, my small selection of Milton Bradley video game board games. I went into my storage closet and pulled out my board game box and when I opened it up, my son's eyes lit up like a Christmas tree. Board games based on video games? Too cool! Before I could even get them all out of the box, he was begging me to try one out, so we grabbed the one that was sitting on top of the pile and played ourselves a rousing round of Pac-Man: The Board Game. 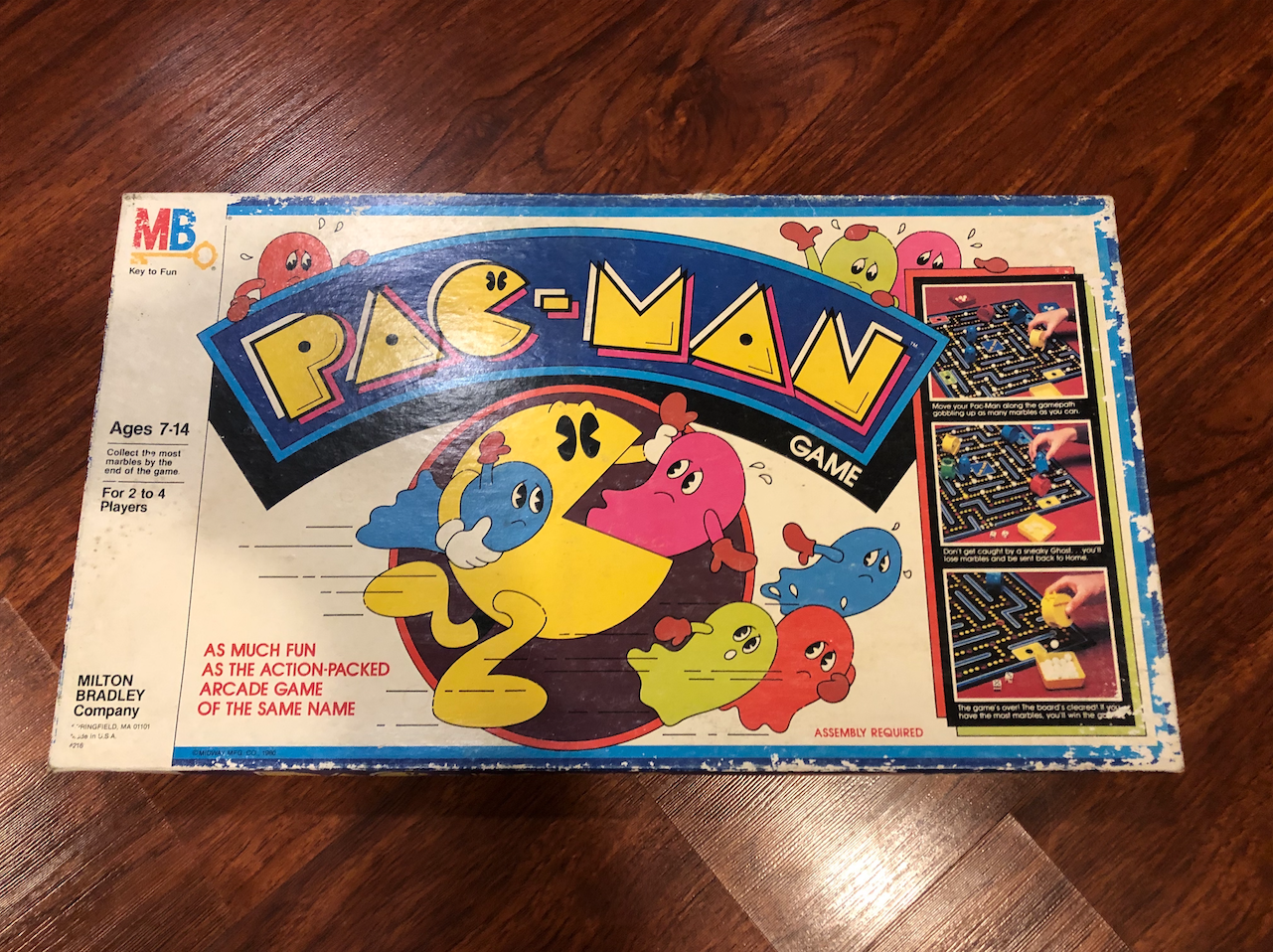 This guy right here I managed to pick up at a yard sale about 10 years ago for a couple bucks. It's from 1982 and just looking at this box is amazing. First off, it proudly proclaims that it's "As much fun as the action-packed arcade game of the same name," which is a bold claim. Then we have the artwork itself. It definitely keeps within the established aesthetic of much of the Pac-Man merchandise of the time, but I'm an especially big fan of how it looks like Pac-Man is just terrorizing the heck out of these poor ghosts. He's got this dead-eyed stare, he's shoving a visibly upset ghost into his mouth, and he's got another one tucked under his arm like a football. Also, there's eight friggin' ghosts on the front of this box! That's double the ghosts of any Pac-Man game of this time. Not complaining or anything, just pointing it out as an amusing inconsistency with the source material.

You'll also notice the box says "assembly required" and I like how they didn't even bother with the word "some" beforehand because this sucker has a LOT of parts. And when I say parts, I mean marbles. 76 marbles, to be precise. There's other stuff too (amusingly enough, only 2 ghosts...) but I can't remember the last time I played a board game with more than 76 pieces that weren't cards or Monopoly money to keep track of. Needless to say, setting it up is a bit of a chore. When it's all said and done though, it really is a pretty clever adaptation of the game it's based on. Each player (up to 4) takes control of a different colored Pac-Man. There are 2 dice in play, 76 marbles, 4 yellow marbles, however many Pac-Mans are playing, and 2 ghosts on the board. Each player takes turns rolling the dice. The number on one dice moves the ghost, the other moves your Pac-Man. The goal is to avoid the ghosts and eat as many marbles as possible. Whoever has the most marbles at the end of the game wins. Pretty simple setup, really, and it's actually really fun once you get the hang of it. 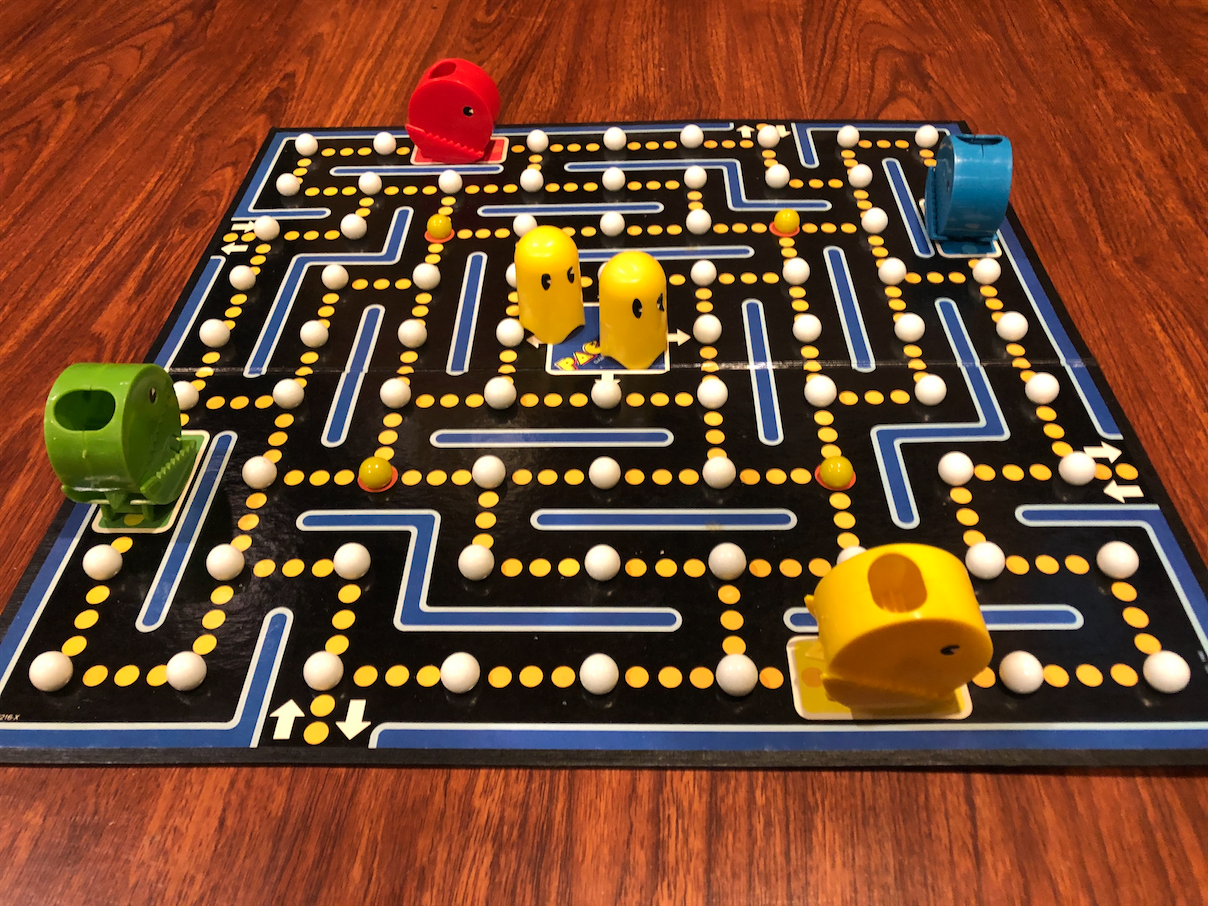 They even managed to incorporate the power pellets into the experience with the 4 yellow marbles I mentioned before. If your Pac-Man gets one of the yellow marbles, he becomes immune to one ghost hit. However, if you aren't lucky enough to have a yellow dot in your inventory and a ghost gets you, you're sent back to your home spot, and the person who made the ghost hit you gets two of your marbles. So there's definitely some strategy involved in the whole thing. Each turn eventually becomes a risk/reward scenario, deciding whether to go for more dots, or attack your opponent. 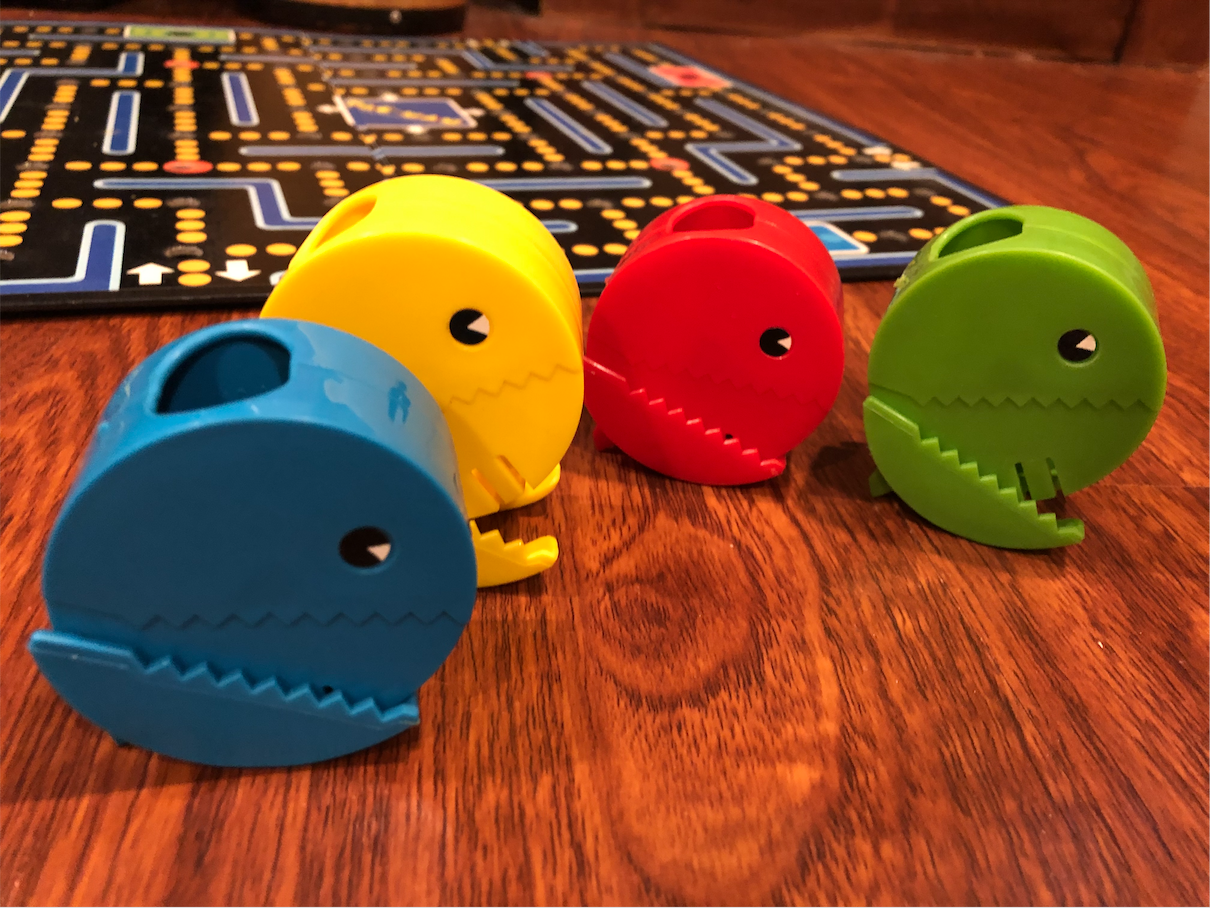 As you may have seen from the pictures, there is something a little off about the game's Pac-Man pieces. Instead of delightful little round characters, they decided to make Pac-Man into these hideous monsters and ooouuuuuggghhhh, WHAAAAAA???? What's with the jagged teeth? Why do their jawlines stretch all the way to the back of their heads?They're really quite terrifying, and only vaguely resemble Pac-Man at best. However, if you can manage to get past their frightening visages, they are pretty remarkable feats of engineering, and honestly, they're a big part of why this game is actually fun. They actually eat the marbles!

It takes some getting used to, but as you move these critters across the game board, you move their open jaws over a white marble, press down on them, and voila! They eat the marble. This is such an above and beyond kind of thing, and I can't believe they managed to pull it off so well. It isn't perfect, but it really adds a ton to the gameplay, especially if one or more of the competitors happens to be a small child. Just not too small, because there's a constant and very real threat of 76 marbles rolling all over your house.

Pricing for this game is all over the map. I've seen them go for anywhere between $25 and $90, so I guess shop at your own risk. Like I said, I was lucky enough to nab this at a yard sale, and I have to say I'm very happy with my purchase. Considering its age, I'm amazed its in as good shape as it is, and especially amazed it has all its marbles. Not that white marbles are all that hard to replace, but you know, it's nice to have the originals there. This little venture has ignited my interest in seeing just how many of these things I can track down though. I have six of them, including Pac-Man here, and after doing a little internet research, I know there's a ton that I'm missing, like Jungle Hunt, Sonic the Hedgehog, and Pitfall. I've also never played the ones I picked up at that yard sale, so I'm looking forward to my son expressing interest in the next game in line so I can write all about it here.

Have any of you played this game before? I'd love to hear about it!