A few weeks ago I got to talking about the Pac-Man board game and all of its insanity. Because my son and I had so much fun with it, we decided to work our way through all of my video game board games. The next one we hit was Centipede. I had no idea what to expect from this one, but it turns out, Centipede makes for one heck of a board game.

I mentioned last time that I got the bulk of these games in a garage sale. Centipede, however, was given to me by a friend. Her mom was cleaning out their storage unit and she said she had a bunch of "old Nintendo stuff" to get rid of. As some of you may know, when the people around you know you're into old video games, you are occasionally lucky enough to have them just kind of give you stuff. Usually it's a bag of dusty old NES or Genesis games. Maybe a system or two. These kinds of things are always welcome, but I do have more than my fair share of copies of Sonic 2, if you know what I mean. Still, you never know what you're going to get on these kinds of excursions, so I went to this storage unit with that giddy kind of excitement that comes from a trip like this. When I got there, the "old Nintendo stuff" turned out to be a Power Pad... and that's it. No system, no games, nothing but a single Power Pad and some wires. Not even game system wires. Just wires. I think to an old stereo or something. However, just because this unit was devoid of video games, doesn't mean it didn't have any good stuff in there.

She just wanted to get rid of as much stuff as possible, so she started tossing toys in my direction. She knew I had kids, so she handed me box after box of cool old stuff. A lot of it turned out to be junk, but I wound up with a cool robot toy, some old metal Tonka trucks, and some board games, including the versions of Battleship and Chutes and Ladders I had when I was a kid, and by far the most exciting thing in there, a copy of the Milton Bradley Centipede board game, something I didn't even know existed at the time.

First off, unlike the Pac-Man box, this one is absolutely awesome. I've always loved the art associated with Centipede and Millipede. Sometimes it's sci-fi, sometimes it's fantasy, but it's always something shooting a giant bug, and this box does not disappoint. It is rather amusing that it features a dude shooting the centipede since that's not at all how the board game interprets its source material, but it honestly doesn't matter. This thing is just awesome.

As for the game itself, as soon as I got it home I opened the box because I just had to see what was in it. Seriously, how the heck do you adapt Centipede into a board game? Donkey Kong, I can imagine that. The Legend of Zelda, sure. That makes sense. But Centipede is a pretty fast paced game, and board games by nature are absolutely not. But if they could make Pac-Man work as well as it did, I'm sure some level of creativity could make this one work. So when I opened the box, I saw something that looked like a gun turret, a bunch of cardboard coins with mushrooms on them, and a bag full of these little plastic nubs with some sort of drawing on top. Thoroughly confused, I closed the box back up and put it to he side. It was a cool thing, but until I had someone to play it with, I was just going to let it be this cool oddity that looked cool in my collection. Fast forward a year, and my son's interest in board games meant it was finally time to see exactly how this madness worked. 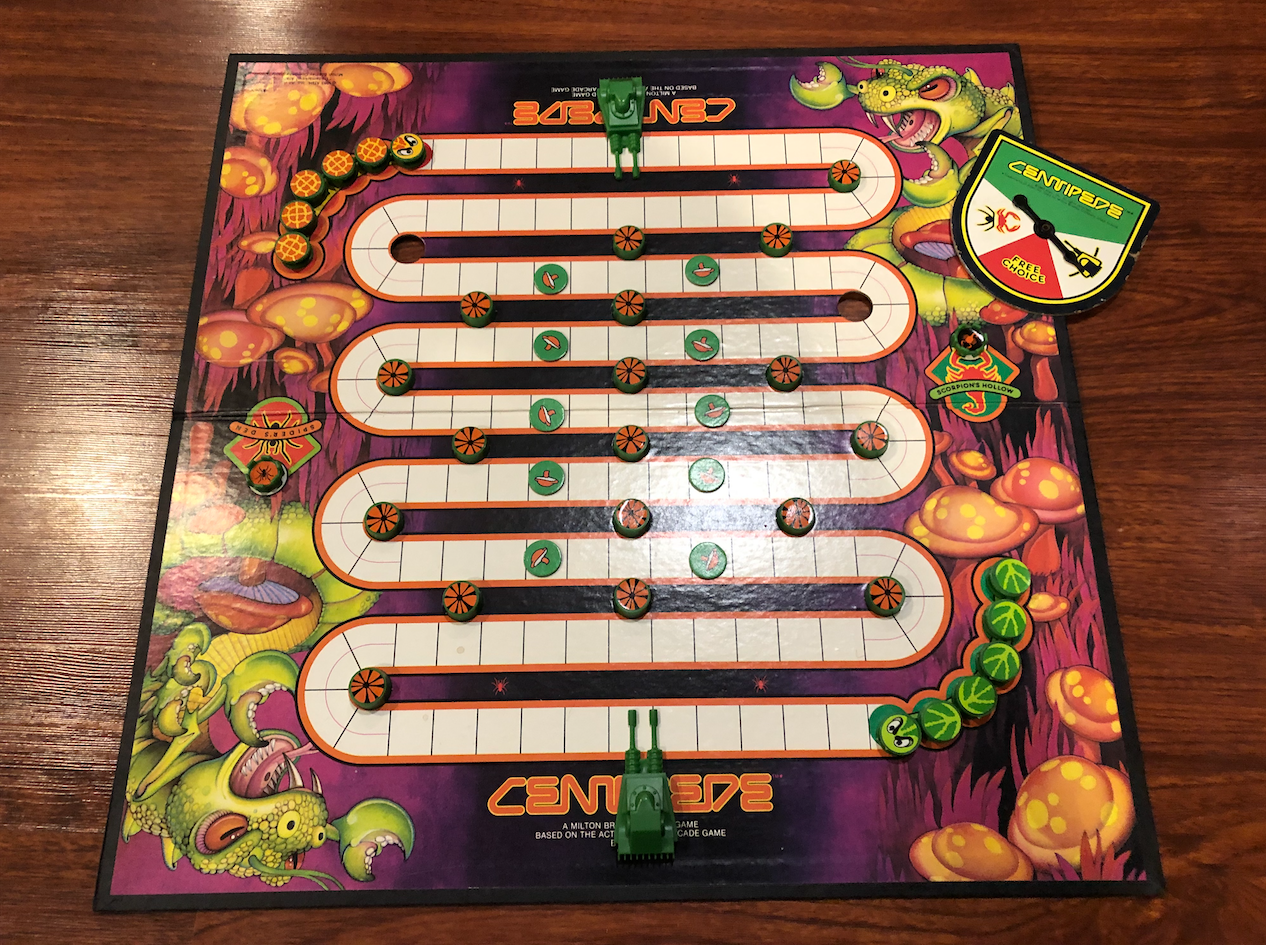 This is what the board looks like when it's all set up. Each player (has to be 2) has a gun turret that gets placed over the edge of the board. I took this picture before I figured out that there's a little lip under the turret that lets it sit just off the edge of the board. Those plastic nubs I mentioned represent the mushrooms that start out on the board in the arcade game. I'm missing two of them, which is why there are two holes toward the top of the picture. They get plugged underneath the board and stick out once it's laid down flat. The mushroom coins actually are supposed to be placed off to the side. The players can lay them down where they want as the game is played, but we'll get to that a little more in a bit. There's a spinner as well that each player uses each turn, a scorpion and spider piece that do things with the mushroom coins, and my favorite part, the centipedes themselves. 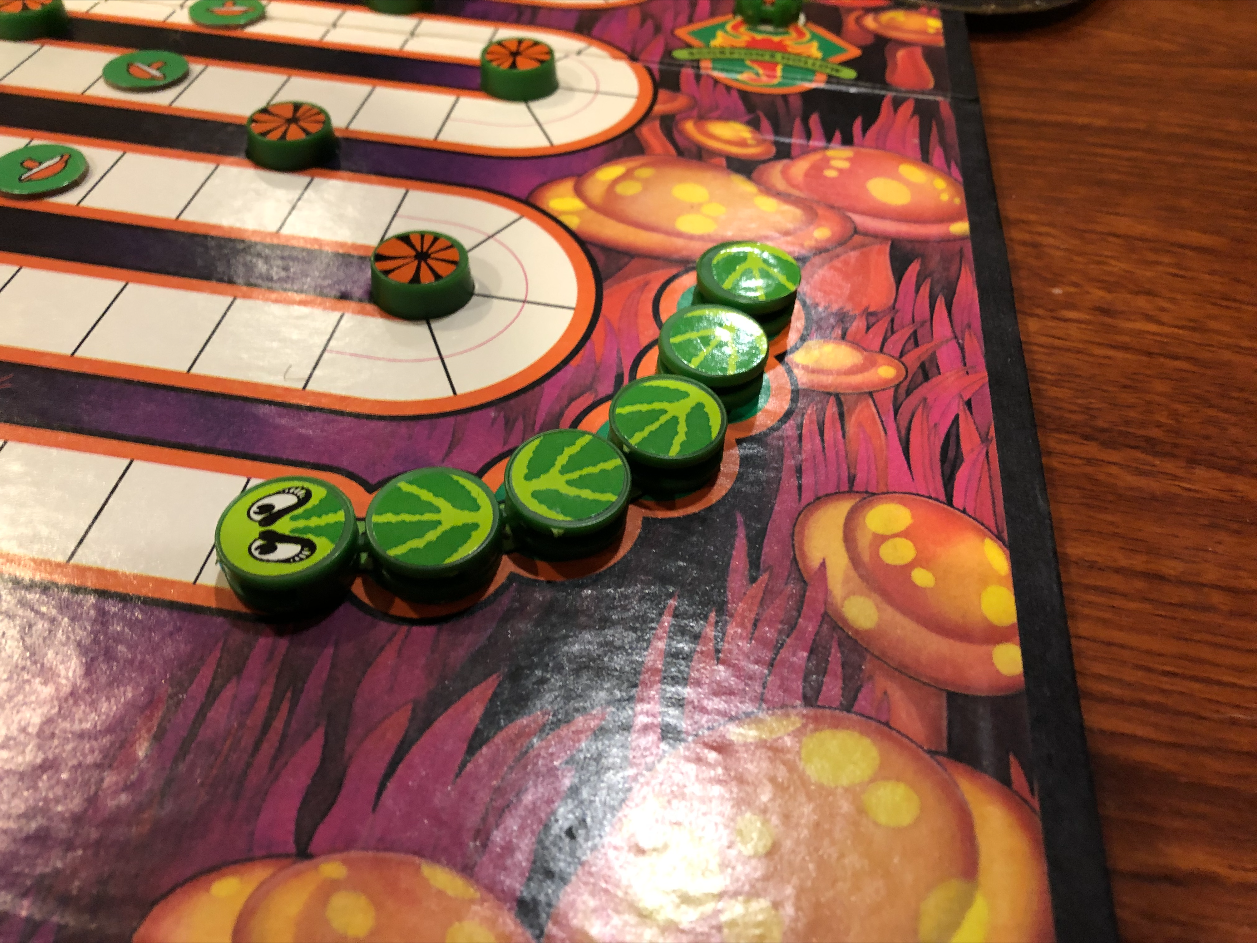 These things are so cool. They're segmented in a way that lets you turn each individual piece upside down, signifying that that piece of your centipede has been destroyed, because just like in the game, the centipedes are destroyed one segment at a time. I also love the goofy angry eyes on the heads. This game's whole design is super cool. 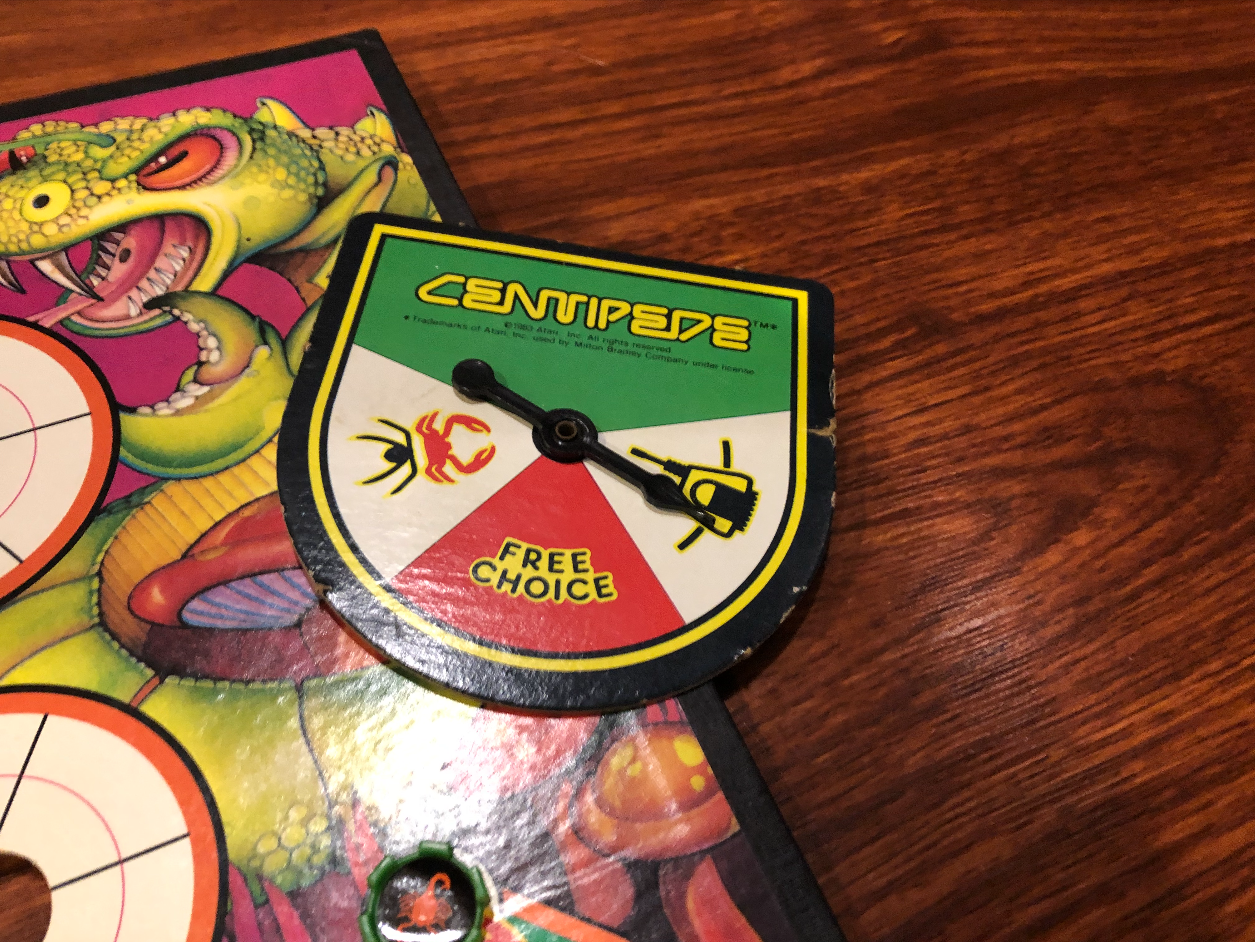 So, let's dive in to how you play. It's a bit complicated, but it didn't take long for us to learn how it works (or at least how we THINK it works) and start having a ton of fun. The two players alternate turns spinning the wheel. Depending on what you land on, you can do something different with your turn. First, you have the Centipede spot. If you land on Centipede, you get to move your centipede as many spaces as your centipede has segments. Each centipede starts with six segments, so that means you can move six spaces. If you've been shot and you lose a segment, you can only move five spaces, and so on and so on. If your centipede's head is shot, you can't move at all. Instead, your Centipede spin becomes a healing move. In place of moving, you heal your centipede's head and you can move again the next time you get the Centipede spot. This one I'm a little uncertain of, but I think the rules say that you can also sacrifice any Centipede spin to heal a segment. That's how we played, anyway.

Finally, we have the spider-scorpion space. If you land here, you can either use the scorpion to place a mushroom, or use the spider to destroy one. The mushrooms are where the real strategy of the game comes into play. All the mushrooms you set up before the game began don't block anyone's path. However, the mushroom coins can only be placed on specific spots on the board marked by a small circle, all of which do, in fact block the path. If you run into one of these mushrooms, just like in the game this is based on, it works as a sort of shortcut. Your moves get to turn off the path and basically cut chunks of the board out of your way as your centipede moves between one of the mushroom coins and the mushrooms you placed at the beginning. The overall object of the game is to get your centipede to where your opponent's centipede started, so these shortcuts are incredibly valuable. Naturally you want to place these in positions that are most helpful to you, but the shortcuts can be used by either player, so you'll want to make sure you destroy mushrooms you've already used with either the spider or your gun turret.

There's also the free choice spot you can land on, but that just means you can perform whatever kind of move you want.

Of all the games we've played, this is the one we keep coming back to. Well, this and Zelda. (Zelda is great.) Never in my wildest imagination did I think a board game based on Centipede could actually be fun, but here we are, and it really is great. Oddly enough, there was a new Centipede board game released I think just last year, but I haven't tried it. It looks like it plays completely differently though. There's cards involved! I'd be curious to see how it stacks up to this one. 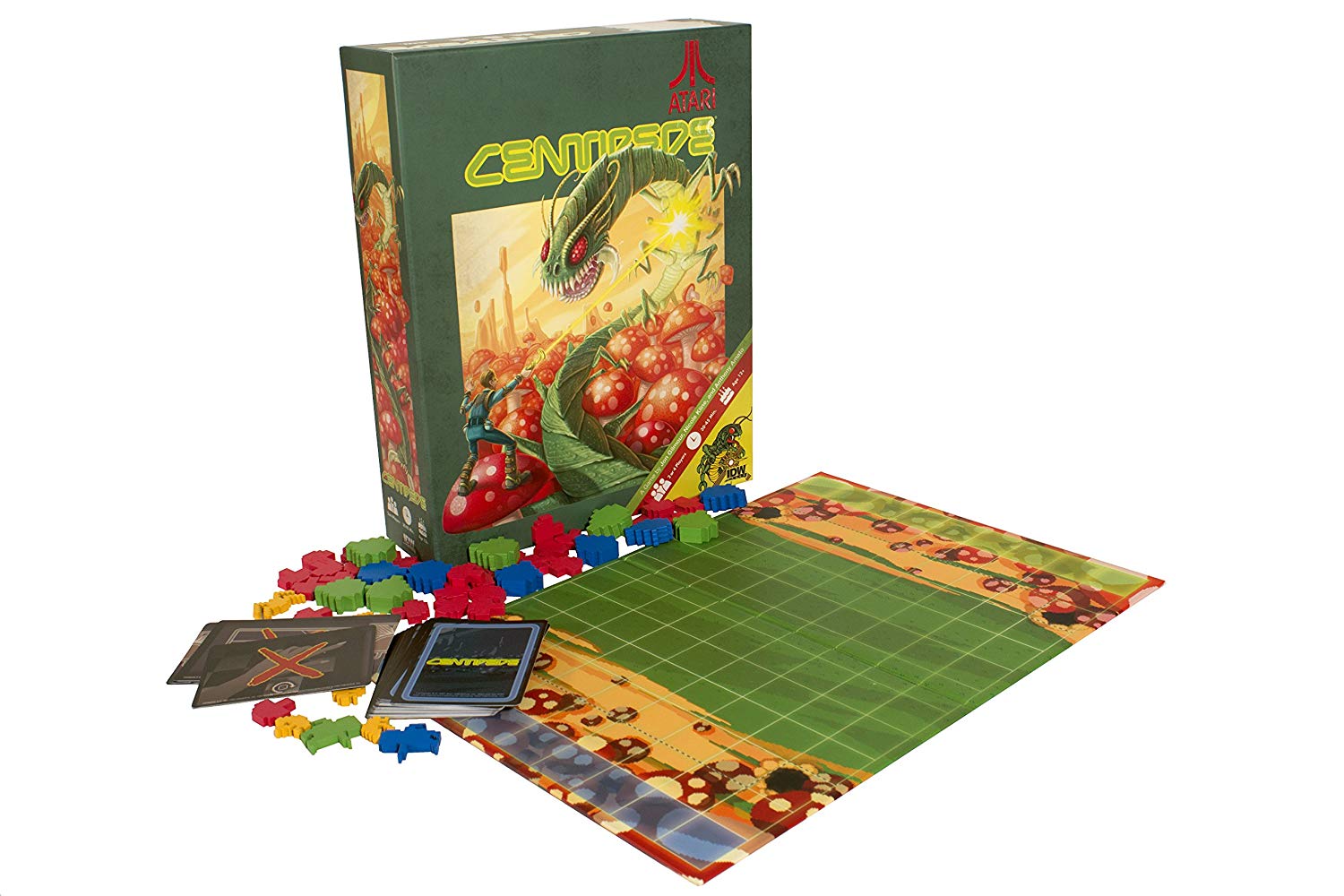 So far in our Milton Bradley board game adventure they're two for two. Here's hoping they kept up this kind of quality for the rest o their releases. I guess we'll find out soon!