When your favorite games deck the halls

Christmas and video games have always had a pretty wonderful relationship with one another. Naturally, they make for some of the best gifts a kid (or kid at heart) can get each year, but it goes deeper than that. In fact, Christmas video games are an entire sub-genre unto themselves, albeit a fairly limited one. There are several games like Daze Before Christmas and Santa Claus Saves the Earth based around St. Nick himself, and you could certainly argue the old Wisdom Tree games are in the spirit of the holiday if that’s what it means to you. But perhaps the most special holiday games of all are the ones that take existing properties and put a jolly spin on them.

A Sampler of Spirit

Back in 1996, Sega got into the holiday spirit big time and released Christmas NiGHTS, a modified version of their classic NiGHTS into Dreams for Sega Saturn, and it was pure magic.

NiGHTS into Dreams is one of those Saturn games that usually comes up whenever the platform is mentioned in conversation. It’s an incredibly unique game with an unforgettable visual style and memorable soundtrack. It never caught on the way Sonic did, but it certainly left its mark, even with very few follow-ups.

Aside from being remastered from the ground up for PlayStation 2, there were a couple of LCD games, a handful of cameos in other Sega games, and one actual sequel released on Nintendo Wii, and that’s about it aside from this delightful freebie right here. 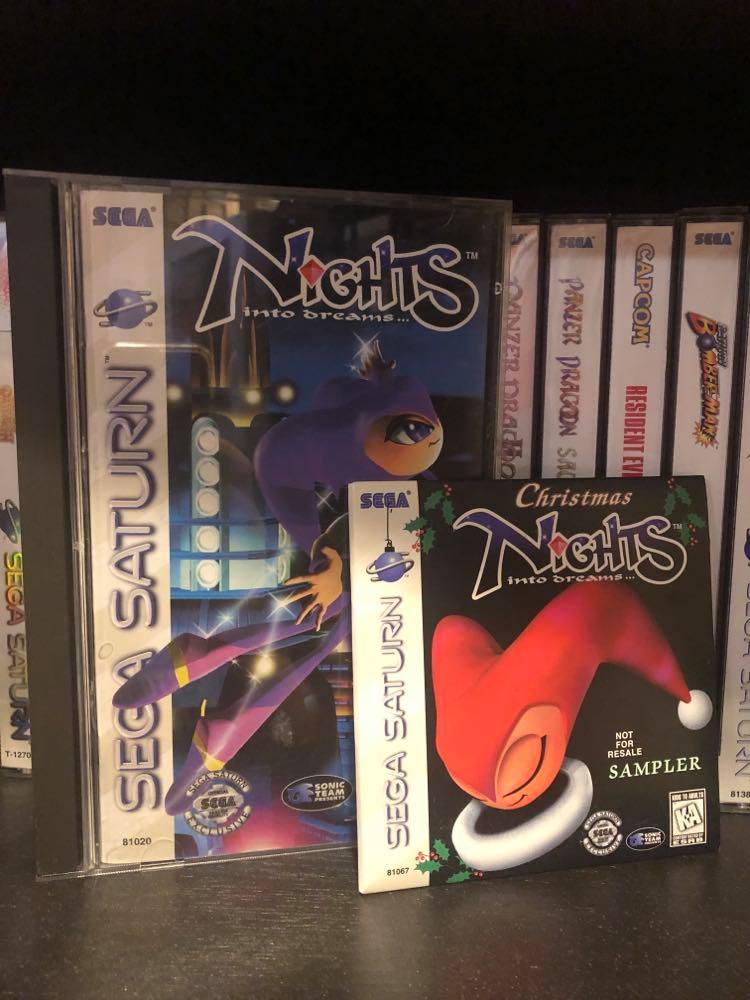 Christmas NiGHTS is exactly what it looks like. It’s basically a demo for NiGHTS into Dreams, and if you play it most days of the year that’s exactly what it’ll look like. Boot it up on specific dates though, and things get all kinds of jolly.

The big one is obviously Christmas, since that’s what’s on the sleeve. Basically, when you start up the demo, the game will ask you to confirm the date. If you play during the month of December (or just tell the clock that’s when you’re playing), the game’s entire visual aesthetic changes.

The demo lets you play through Claris’s first stage Spring Valley as either her or Eliot. If you’ve never played NiGHTS before, it’s a beautiful world filled with green fields, blue skies, and flowing waterfalls. In Christmas NiGHTS, everything becomes snow-covered, all the trees become evergreens decorated with holiday ornaments and lights, and those iconic orange rings are replaced with christmas wreaths. It’s a heck of a sight.

The music changes to a very NiGHTS-ish version ofJingle Bells too, which really ties the whole thing together. 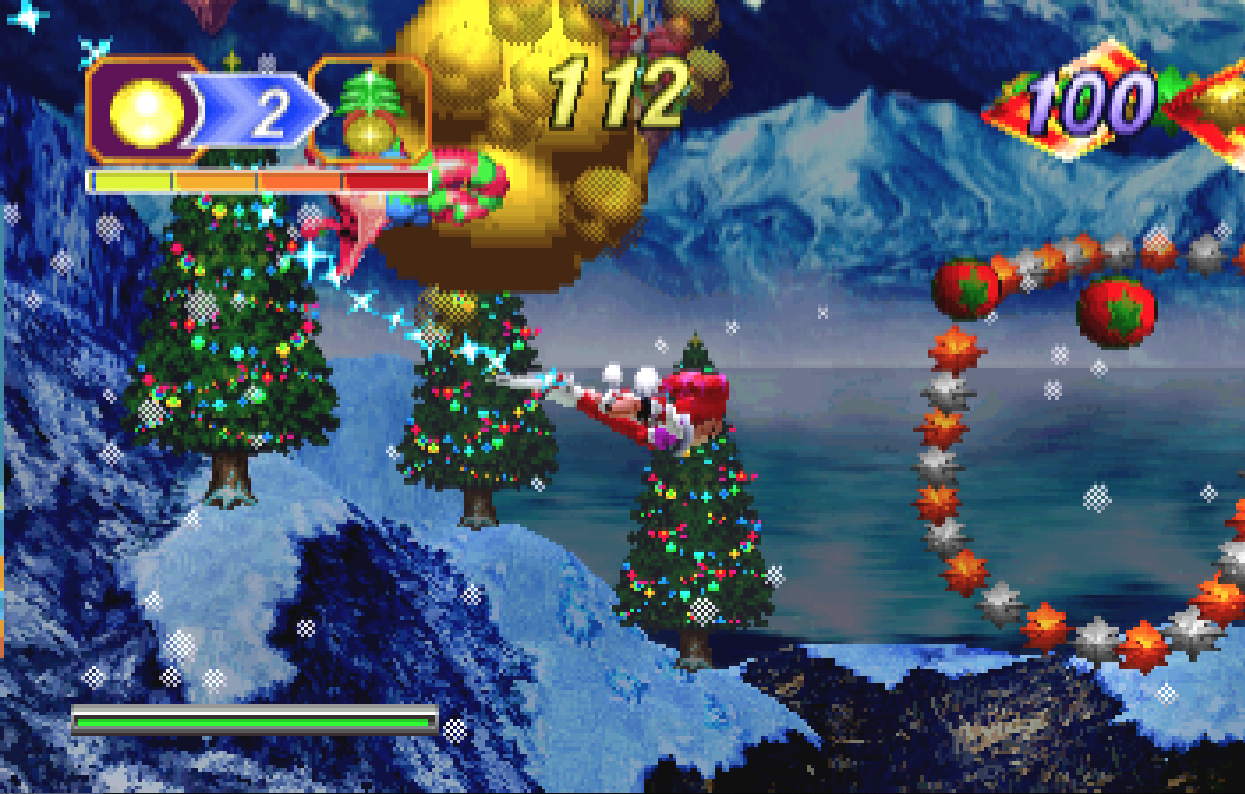 The More the Merrier

But while that’s the big one, there are a couple of other dates that do fun things too. Boot it up on New Years for some different music, Valentines Day for some floating hearts, or April Fools Day to play as Reala instead of NiGHTS. There are even minor visual differences depending on what time of day you play. It’s really something.

And no, it’s not NiGHTS with a Sonic skin, it's literally Sonic. So you can’t fly. You’re just Sonic, trying to traverse this lumpy terrain that was clearly not designed to be played on for an extended period of time. It’s neat, but I wouldn’t exactly call it fun.

There’s a cool unique boss battle though, so that’s something!

This disc was originally given out as a freebie with issues of Sega Saturn Magazine. I didn’t have a copy myself for a long time, but I was able to play it on my PlayStation 3. On PSN, you can buy the PS2 remaster of NiGHTS, which includes all of the Christmas NiGHTS content, also remastered like the rest of the game. It’s really quite spectacular.

A friend of mine gave a real copy to me as a gift one year, and I was eventually able to get this fantastic custom case and manual for the game courtesy of Sega Saturn Shiro. 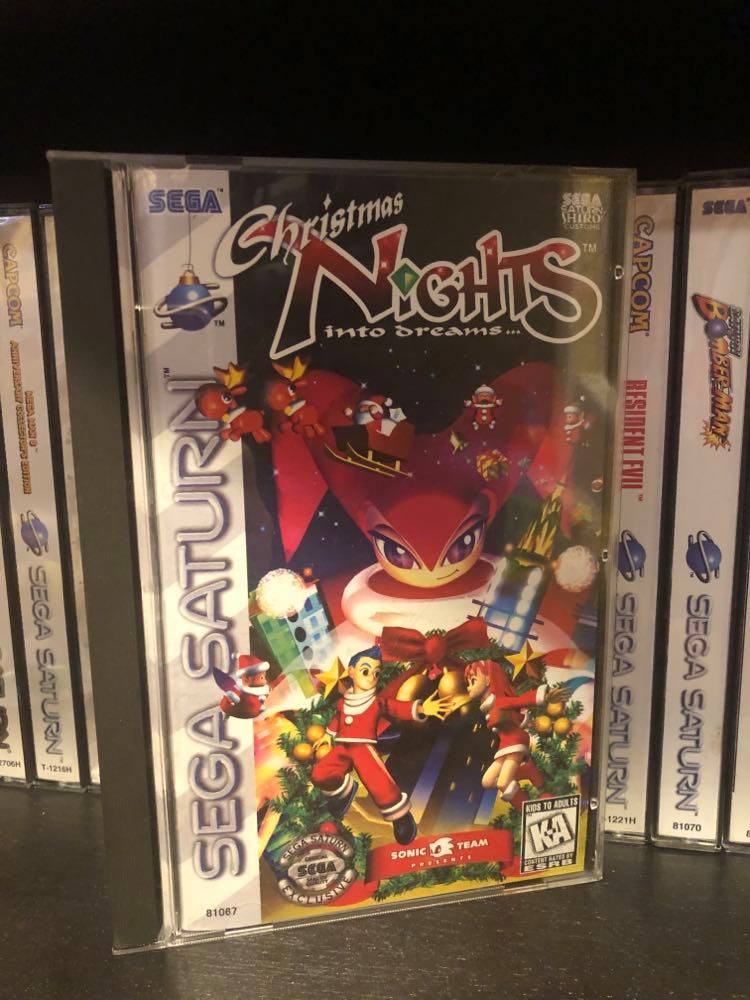 It’s been a holiday tradition in my house for years to play through this jolly delight every year, and each and every time it brings a smile to my face. Do you have any holiday video game customs?