A Video Game Movie, Not a Movie about a Game

This Mario Movie sure looks like something, doesn’t it? This whole thing has had me very nervous since the moment it was announced for a number of reasons. Yet against all odds, here we are. They’ve released two trailers and they’ve both felt like something that’s been made with an astonishing amount of love and care. I don’t know exactly what I expected when this was announced, but being impressed certainly wasn’t it. I am, though. It’s doing so much of what I always wanted a video game movie to do that I honestly can’t believe my eyes. It’s taking liberties so it isn’t just a literal retread of the games themselves, but it’s doing so with not only a ton of respect for the source material, it’s actually incorporating the “story” of playing the games into the movie itself.

The “Story” of Games

Think about that for a second. What’s the story of Super Mario Bros.? Bowser kidnapped the princess and Mario & Luigi set out across the Mushroom Kingdom to save her. That’s it, right? Well, that’s it for the beginning of the story. The rest of the story is the game itself. There aren’t narrative plot points per se, but a ton of stuff happens between where the backstory leaves off and the actual ending of the game. Mario jumps in a pipe and finds a secret room full of coins. He finds a magical mushroom that makes him taller and stronger. He finds a flower that lets him throw fireballs. He finds a super star that makes him temporarily invincible. He encounters monstrous turtles that he can kick around and use as weapons. He travels through an underground cavern and has to navigate bottomless pits to get to the other side. Then he crosses a giant chasm by jumping on the treetops. Once he makes it to the other side, he encounters an enormous castle filled with fireball traps and actual lava pits. He ultimately comes face to face with the giant lizard monster Bowser, finds a way past him only to discover that he was a decoy, and the Princess is in another castle.

That’s just World 1. There’s an entire story to video games that isn’t told in cutscenes or through quicktime events. The story of Metroid is what happens to Samus while she’s looking for Mother Brain. The story of The Legend of Zelda is Link finding the Triforce pieces. Just because there aren’t people talking with one another for most of it, doesn’t mean there isn’t an adventure happening. It’s storytelling through gameplay, and it’s why I fell in love with video games as a medium in the first place.

So in the new trailer when Mario, Peach, and Toad walk across a bridge and Mario gets hit by a Cheep Cheep, I flipped because for what seems like the first time ever, someone is actually adapting a video game into a movie. The events of the game are being portrayed as part of the narrative. I don’t know how deep that kind of stuff is really going to go, but what I’ve seen so far is wonderful. It’s a completely different approach to making a video game movie than I’ve seen before, and while I’m still all manner of nervous about bad jokes and annoying Minion-like characters getting shoved in my face, I can’t help feeling this sense of excitement for a movie that takes the time to actually adapt the game instead of telling a cookie cutter kids movie plot with some video game references slapped on top.

I’m talking specifically about Sonic the Hedgehog here. Look, I don’t hate the Sonic movies. They’re fun little things and my kids enjoyed them, but they could have been so much more. What’s always bothered me most about them was the tired premise of Sonic landing in the human world. That they decided to make it live action at all when what’s so fantastic about Sonic is, well, how fantastic the world he comes from is.

That is an image from the beginning of the first Sonic movie, and wow. Just wow. They start the movie off with this incredible look at this colorful, fantastic world. Sonic runs through a loop, a thin patch of land crumbles behind him, it’s perfect. Then moments later all that fun and fantasy gets ripped away in favor of a small town road trip movie that’s about as by the numbers as could possibly be.

In the second movie, nearly everything with the human characters was groan-worthy, and it counteracted so much of the good stuff. If they just had the faith in the property itself to make a Sonic movie instead of a kids movie with Sonic in it, it could have beaten Mario to the punch of being the first truly good video game movie. But it didn’t, because it’s not a video game movie. It’s a movie with video game stuff in it.

Mario, on the other hand, seems to be drawing a shocking amount of inspiration from the Super Mario bros. Super Show. Look, I’m WELL aware that that isn’t a “good” television show, but as a kid I couldn’t wait to get home from school and watch it every single day, and the fact that it’s being referenced as much as it is is astounding.

In the first trailer, they played a piece of music that to many probably just sounded like a bit from the first NES game, but I immediately recognized it from the intro to the Super Show. Now, just ahead of this trailer there was a pair of posters that say “We’re the Mario Bros., and plumbing’s our game,” which are the first lyrics of the show’s theme song. That isn’t a coincidence, these folks likely grew up watching that show too. 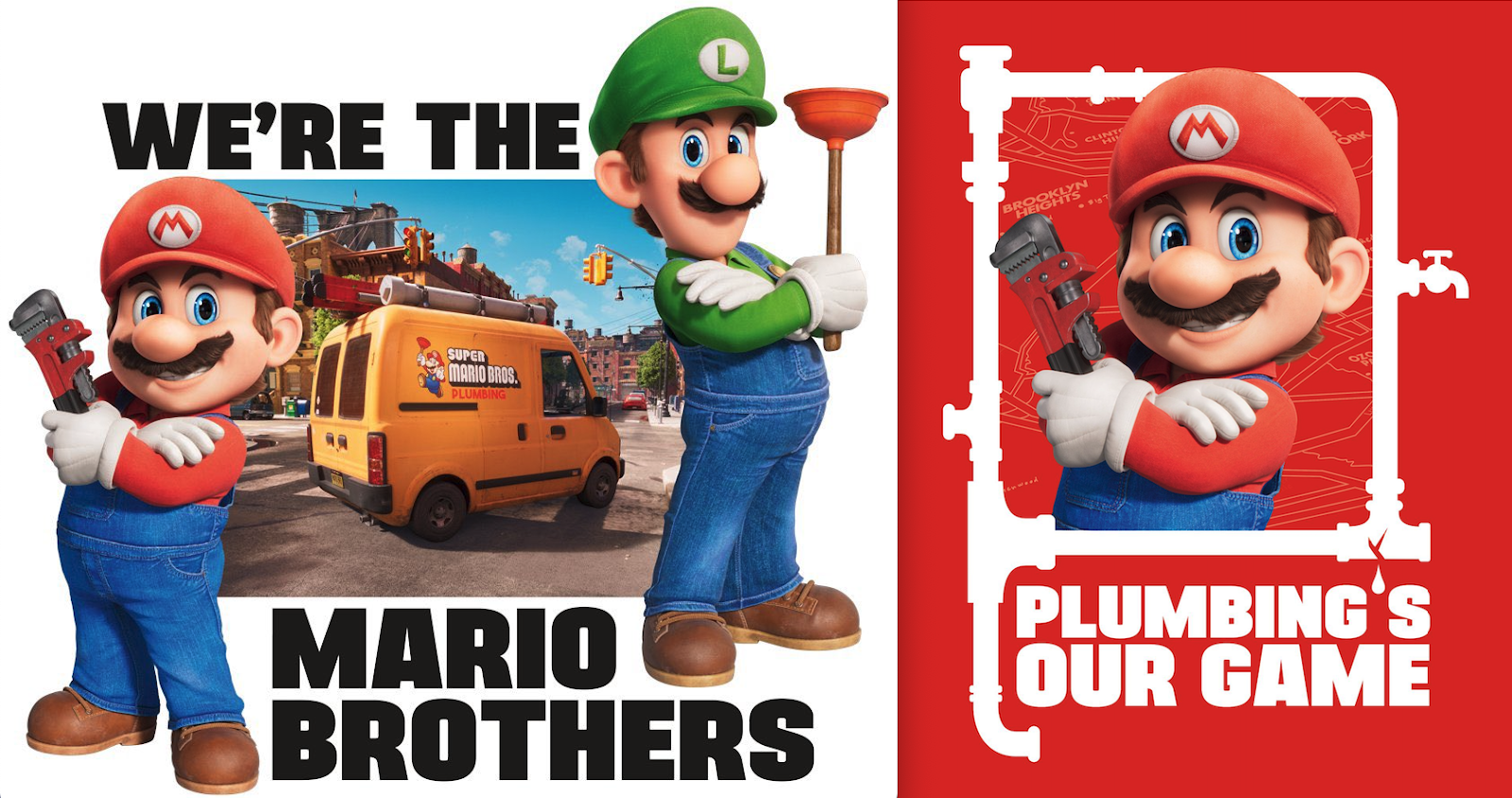 Then there’s the characterizations. Having Peach not just be the mostly brainless damsel in distress is giving me serious Super Show vibes. There, she was with the team on most of their adventures. She got kidnapped sometimes, but so did Toad, and Luigi, and Mario. Of course in the new movie they do run the risk of making her a one-dimensional character in the opposite direction, being #GirlBoss 24/7 is nearly as bad as being a vapid plot prop who exists solely to ask Mario for help, but the bits we’ve seen don’t point to that. She loves her kingdom and speaks about it with reverence, so her and Toad are playing tour guide. Meanwhile, I know some folks have looked at the trailer and thought Mario is being portrayed as a bumbling idiot who can’t do anything right, but I don’t think that’s the case. I think he’s a perfectly capable everyman, but when he’s introduced to the insanity that is the Mushroom Kingdom, it’s going to take some getting used to, and there’s going to be plenty of slapstick humor based around that premise. But I think he’s going to get the hang of things and become the Mario we all know and love by the end. We did see him flying in a Tanooki suit, after all.

But again, back to the Super Show, the Mario Bros. are from Brooklyn again! It’s another callback to the basic plot of the Super Show, which we haven’t heard a peep about in an official capacity in ages. Heck, Mario being a plumber has been all but completely phased out of the games, but here we are. And it’s not the “real world” Brooklyn either. Just look at this place. 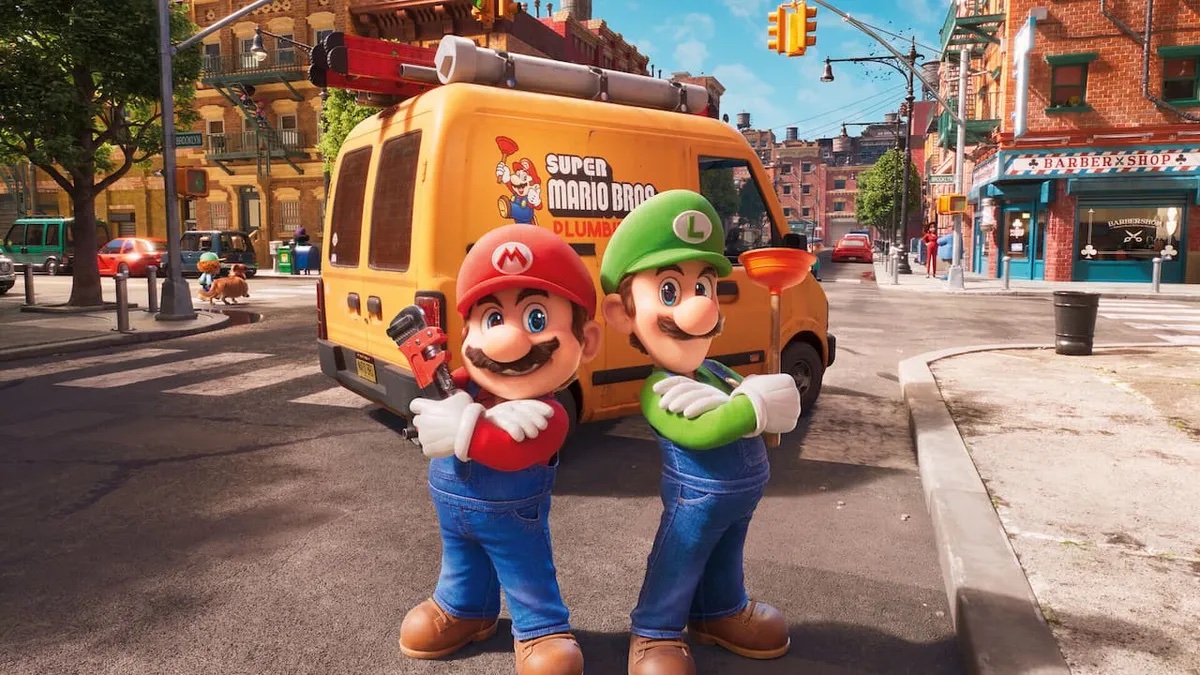 Much like the Brooklyn of the Super Show, even the live action bits, this is a heavily stylized cartoon world Brooklyn. They aren’t from the real world, like what they did in the Sonic movie. These guys are from movie Brooklyn, and I love it.

Now, a word about the voices. A lot has been said of Chris Pratt’s performance, and I can't say I completely disagree. Especially in light of hearing how enthusiastic and genuinely awesome the rest of the voice cast is, Chris Pratt sounds kind of dull. But the complaint that he doesn't sound like Charles Martinet hits differently for folks my age. When I was growing up, Mario didn’t have a voice in the games. The first time I heard him speak was in the Super Mario Bros. Super Show where he was voiced by Lou Albano. Then in Hotel Mario for CD-i he sounded like that again, only with an even deeper voice. Then Bob Hoskins played him in the live action movie. So when Super Mario 64 came out and Mario sounded like a high-pitched Italian stereotype, it was pretty jarring. Chris Pratt sounds like a happy medium between the old voice and his current one. I wish there was a little more energy in his performance, but I certainly don’t hate it.

The rest of the cast, though, sounds a lot more like their Super Show counterparts than I would have expected. Toad, Bowser, Luigi, and Peach seem to be drawing a lot more from those old voices than their video game counterparts, and I’m honestly perfectly fine with that. With the art direction being so distinct from the games, I’m totally cool with these being very different interpretations of these characters. If they went ahead and used the game voices, it would be weird not because those actors couldn’t do the roles, but because it would make the lack of actual talking in the games seem weirder by comparison.

Hope for the Future

I do have one exception, though. In the Sonic movies, the Tails voice actor reprised her role for the movie, and that was great. For the Mario universe, I would love to see that applied to Wario. We haven’t seen or heard a single thing about Wario being a part of this movie, but we do know that Charles Martinet has an undisclosed role in there somewhere. Wario has done plenty of conversational talking over the years, so having him show up with his original voice would work very well. The question is, how do they fit a character like Wario into this thing?

On one hand, Martinet’s Wario showing up at the end to be set up as the main villain of the sequel would be incredibly cool. An adaptation of 6 Golden Coins? Sign me up. But what about Wart? What if the second movie heads to Subcon? They also mentioned Galaxies in the trailer, so what if they introduce Rosalina and the second movie is an adaptation of Super Mario Galaxy? Or maybe the galaxy line was more of an allusion to outer space in general, and Tatanga shows up. There’s an island in the trailer that looks like it could very well be Sarasaland.

This movie is reminding me of how it felt to be a Mario fan when I was a kid in a way that I didn’t think was possible anymore. I adore the modern Mario games, but when I was a kid, every Mario game looked vastly different from the last one. There were more villains than just Bowser. The cartoon series was absurd, but it was fun, and for all its MANY faults, the world always felt exciting and fantastic to be in. This is the most alive the Mushroom Kingdom has felt to me in decades, and it’s brimming with personalities. The Toads look different from one another. So do the Koopas, and the Kongs. It feels like a whole universe, and that’s wonderful. Literally, full of wonder.

So will this movie ultimately let me down? It’s a real possibility. But for now, I’m cautiously optimistic. Either way, I'll be there opening day with my kids, and that alone is more than enough to make me excited.