Have you ever written off an entire genre of games without even knowing it? Turns out I have, and it sort of makes me wonder what I’ve been missing. I recently downloaded the absolutely sublime Horizon Chase Turbo on Switch, and now that I have it, I’m genuinely angry at myself for waiting this long.

I remember hearing about the game quite a while ago. The original version is actually a mobile game called Horizon Chase: World Tour that released back in 2015. Not being much of a mobile gamer, I paid it no mind. For some reason, word of the game being ported to PlayStation 4 was brought to my attention, but after looking at a screen shot and deeming it “pretty,” I promptly forgot about it again. Then the game got itself ported to Switch (and Xbox One) in November 2018 and on one of my random strolls through the Switch eShop with my son, he pointed to it and said he wanted it. It as $20, which was more than I wanted to spend on a game I really knew nothing about, so I put it on my wishlist and told him I’d pick it up if it ever went on sale. I will admit that the trailer made the game look really cool. It sparked a little something in the back of my mind that made me remember Top Gear for SNES, but then I probably got distracted by something shiny and forgot about it yet again. 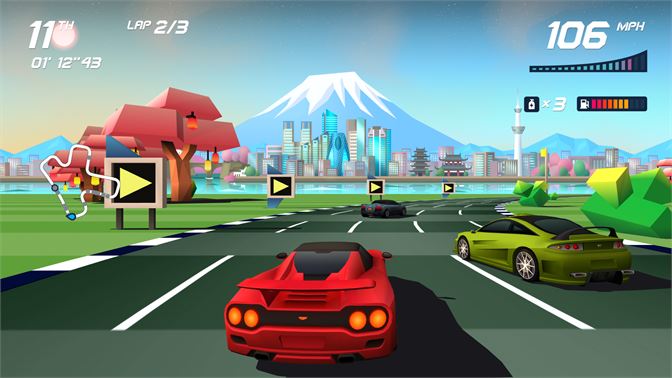 In one of the podcasts I listen to (I can’t remember which one) they started talking about Horizon Chase Turbo on Switch and how much fun it was. But everything they said was tempered with things like “but it’s still just a mobile game port” and “it’s nowhere as in-depth as Gran Turismo” and other bits to that effect. Hearing those kinds of disparaging words, I once again put Horizon on the back burner, likely never to be purchased unless it went on just the right amount of sale.

Then one day it happened. The game dropped to $13, and I saw this while my son was in the room. Having previously promised him I’d buy the game when it went on sale, I kinda had to live up to my word, so I purchased it and started playing.

Within seconds, I remembered something: I used to LOVE racing games!

When I say racing games, I mean specifically racing “games,” not to be confused with racing simulations. I can’t exactly pinpoint when it happened, but I think somewhere around when the original Gran Turismo hit the PlayStation, racing games just kind of stopped being fun to me. Same thing happened with sports games. I used to love playing games like Blades of Steel and Tecmo Baseball, but as technology improved, games gave way to simulations, and that’s just not what I look for in most games. I appreciate it, sure. I’m even impressed by it. But simple fun is where I belong, especially in the world of racing games. 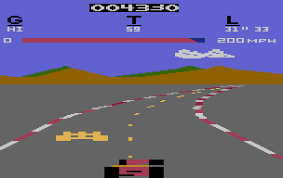 If memory serves me right, my first racing game was Pole Position for Atari 2600. I remember spending a ton of time trying to get to the goals faster and faster. I really loved the effect of the red and white lines zooming past the screen as I drove. I also thought the other cars were fences because they certainly didn’t look like cars. After that, though, I developed quite a nice little obsession with Activision’s Grand Prix. At first it was the super-cool gradient effect they used on the cars that drew me to the game. But before long it was all about getting past the other cars without hitting them so I wouldn’t slow down. It was exhilarating, and it was something I didn’t really get from many other games at the time. But for all the excitement Grand Prix provided, it never could have prepared me for what came next. 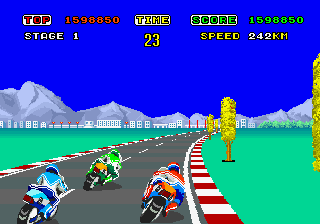 I was in an arcade on a family vacation, and I came across a Hang-On arcade cabinet. It wasn’t the super-cool one where you actually sit on the motorcycle, but it still had these handlebars sticking out of the front of the machine, and holy heck was this game incredible. The music, the billboards flying past at breakneck speed, the way your bike would explode after a particularly terrible crash, it was all amazing. Unfortunately for me, I was still too short to be able to properly play the game. But I watched my older sister play a bunch, and even had her help me a few times by grabbing a stool for me to stand on. I was terrible at it, but it was still so much fun.

Once I got myself an NES, I made sure racing games were a part of my library straight away. Excitebike was neat, but it never really delivered on that “speeding past other cars” feeling I got from my favorite racers. Don’t get me wrong, I adore Excitebike, but on a different wavelength than I love racing games. Rad Racer, though, was a whole other can of bananas. I played it at my cousin’s house and was so taken aback by it I begged my mom and dad for a copy the whole ride home. When I eventually got it, I played it near constantly for weeks. You could drive up and down hills. There was a great variety of tracks and backgrounds to see. (especially that cool night level!) You could even change the music on the radio. But it was the pure act of racing that kept me glued to the TV. Taking those turns, skidding closer and closer to the edge, hoping like heck that I wouldn’t hit a tree and crash, was just such an exhilarating experience. That sound effect will always stick with me. 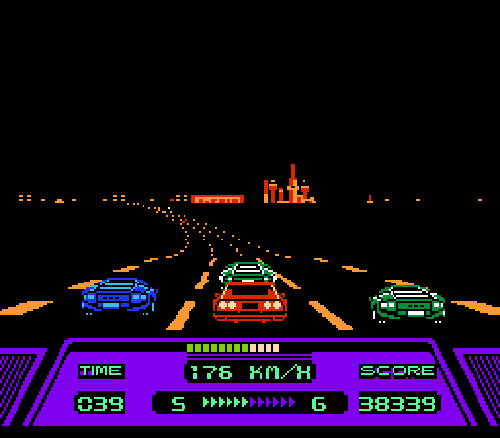 I also spent a ton of time with a couple of very different racers, RC Pro-Am and Super Off-Road. Both of these played out from a top down perspective, so they were intrinsically different experiences than Rad Racer was, but they still provided me with nearly endless hours of fun. RC Pro-Am in particular is still just as fun today as it was back then, and Super Off Road is a pretty good time, too. Still, for all the fun and thrills those games brought me, they reminded me that when it comes to racing, my heart will always belong to a good behind the car view.

The Super NES was where my love of racing games hit its peak. Thanks to the power of Mode 7, F-Zero and Super Mario Kart sauntered into my life with a visual flare I could not deny. I love the way Mode 7 effects look. It’s equal parts terrible and incredibly cool, and the blinding speed of F-Zero and the item-based fun of Super Mario Kart made sure that both of those titles would stick around in my mind forever. There were two (technically, three) other racing games that would completely take over my life, though. Top Gear and its sequel Top Gear 2, and Stunt Race FX. 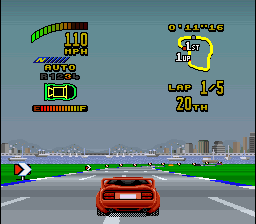 I tend to lump Top Gear 1&2 together because I discovered both games at exactly the same time. My friend had them both, and one day I was over his house and he introduced me to Top Gear 2. We played for hours, and when it was time to head home I asked if I could borrow it. He said “heck no” but he lent me the first Top Gear instead, which is a remarkably similar game, and I played it like there was no tomorrow. I eventually got my hands on my very own copy of Top Gear 2, and it was all over for me. I couldn’t wait to get home from school or wherever I was to play a few more races in these games. There was a certain amount of realism to the way they looked, but a complete lack of realism to the way they felt, which connected with me on a deep level. They weren’t about having the best this and that, they were about pure racing, and I find that endlessly intoxicating. And the music, especially in Top Gear 1, was incredible.

I had a habit of buying into pretty much any 1st party tile Nintendo would release in the SNES era. And when I got to play StarFox with its super-cool Super FX chip graphics, I realized just how cool polygons could be. However, when I first saw Stunt Race FX, I was almost immediately turned off thanks to the arcade game Hard Drivin’. I played this in the arcade at my local mall and while it sure looked futuristic, I was completely incapable of having any fun at all while playing it. Polygonal racing games now had a stink on them for me, and it stuck with me so long I even (tragically) skipped playing Virtua Racing in arcades for years. But those adorable claymation cars on the cover of Stunt Race FX were too much for me to ignore, so I went ahead and rented it from my local shop. The frame rate more closely resembles a slideshow than a video game, but once I got the hang of it, Stunt Race FX provided me with hours, and I do mean hours of entertainment. I positively obsessed over this game for months. I still love busting it out from time to time. It’s always jarring at first, but once it gets going, it fits like a glove. 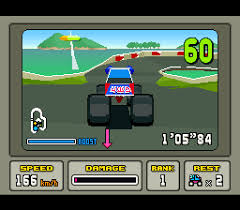 Cruisn’ USA was probably the last arcade racer I spent any real time with. That game was a blast, but it never really felt as tight as the racers I had grown up loving. Next thing I knew, I was avoiding pretty much anything that wasn’t Mario Kart or F-Zero, and my love of racing games was just a memory. Burnout tickled my fancy for a while, but even those games started to get too complex for me.

But here we are, neck deep in this awesome Horizon game, and I couldn’t be happier. It not being as complex as Gran Turismo wasn’t a detriment, it was a freaking selling point, and I just didn’t realize it. So what’s the takeaway here? I guess I don’t know, really. I just thought it was weird that I basically forgot about how much I loved an entire genre of games. Am I alone? Have any of you forgotten just how much you loved something? Let me know! In the meantime, I’m going to obsess over getting super trophies in Horizon.