Talk about something I didn’t think i’d be writing about in 2018. There’s new hardware coming from Atari and Intellivision, and it’s all so, well, weird. The two companies seem to be taking drastically different approaches, which makes the whole thing pretty interesting, but in a world that seems to be struggling to support 3 major platform holders, getting into the game with a new console seems every flavor of crazy to me. Regardless, both the Atari VCS and the new Intellivision are theoretically happening. The big question is though, are either of them interesting enough to convince folks to actually buy them? 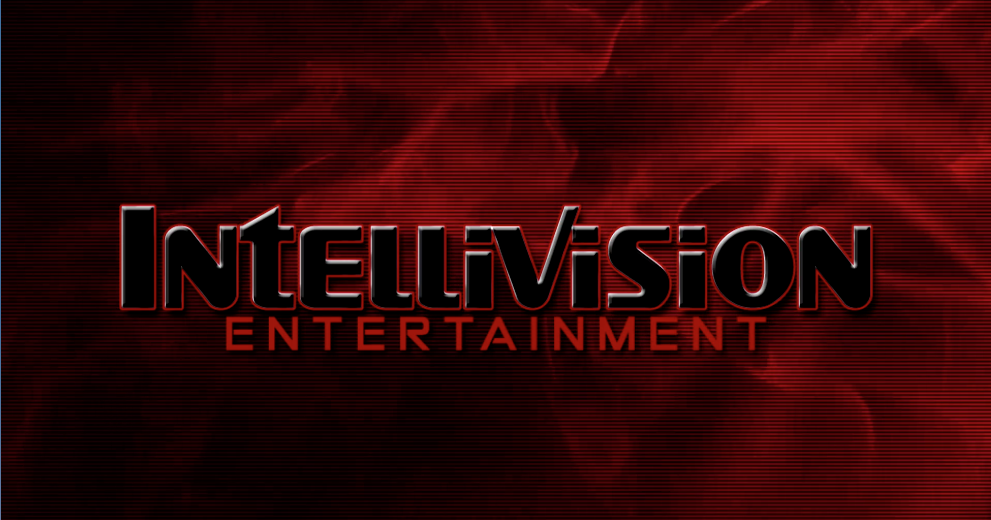 For my money, the one of these two systems that seems to make the most sense to me is the Intellivision. It turns out that Tommy Tallarico is now more or less in charge of the Intellivision brand. Now, I’ve never been the biggest fan of Tommy Tallarico. I remember seeing him at Video Games Live years and years ago. I think it was their first tour, and I left pretty disappointed. Their over-reliance on pre-recorded music really bummed me out, especially considering the show was called Video Games LIVE. Then again, I had just seen John Williams perform a few weeks prior, so my bar for orchestrated music was unreasonably high. Still, by the end when he was jumping around the stage with his wireless electric guitar thrashing his head like a rock star, I couldn’t help but be really turned off. Dude just rubs me the wrong way. There’s something about the way this guy talks and constantly reiterates himself. But the one thing I would never say about him is that he’s disingenuous. He may irk me, but there’s no question this guy’s heart is in the right place, and that’s part of what gives me some hope for this new Intellivision.

When I first read the headline that Tallarico was bringing the INTV brand back with new hardware, my reaction was something along the lines of “not this crap again.” I’ll talk more about my feelings on Atari’s latest piece of hardware in a bit, but the short version basically boils down to me not understanding who the thing is for. Well, Tallarico was very upfront about that right from the get go, and I think he may be on to something. Tallarico feels that the gaming landscape has changed so much over the years that it’s left a lot of people behind. When he was a kid, (which just so happens to be not long before I was a kid) games were simple. Everyone could go to the arcade and have fun, regardless of race, class, gender, or creed. Home console games like the Atari 2600 and Intellivision were social things. Families would gather around the TV and play games together. You didn’t need to be a master to have fun playing Space Invaders or Asteroids (or in the Intellivision’s case, Astrosmash) and that simply isn’t the case for most anymore. Nintendo hit on some of that with the Wii, but they failed to truly capitalize on that market following Wii Sports. It’s my theory that that market can’t really be capitalized on because those folks simply aren’t that interested in playing video games, but Tallarico and his new Intellivision company feel differently. 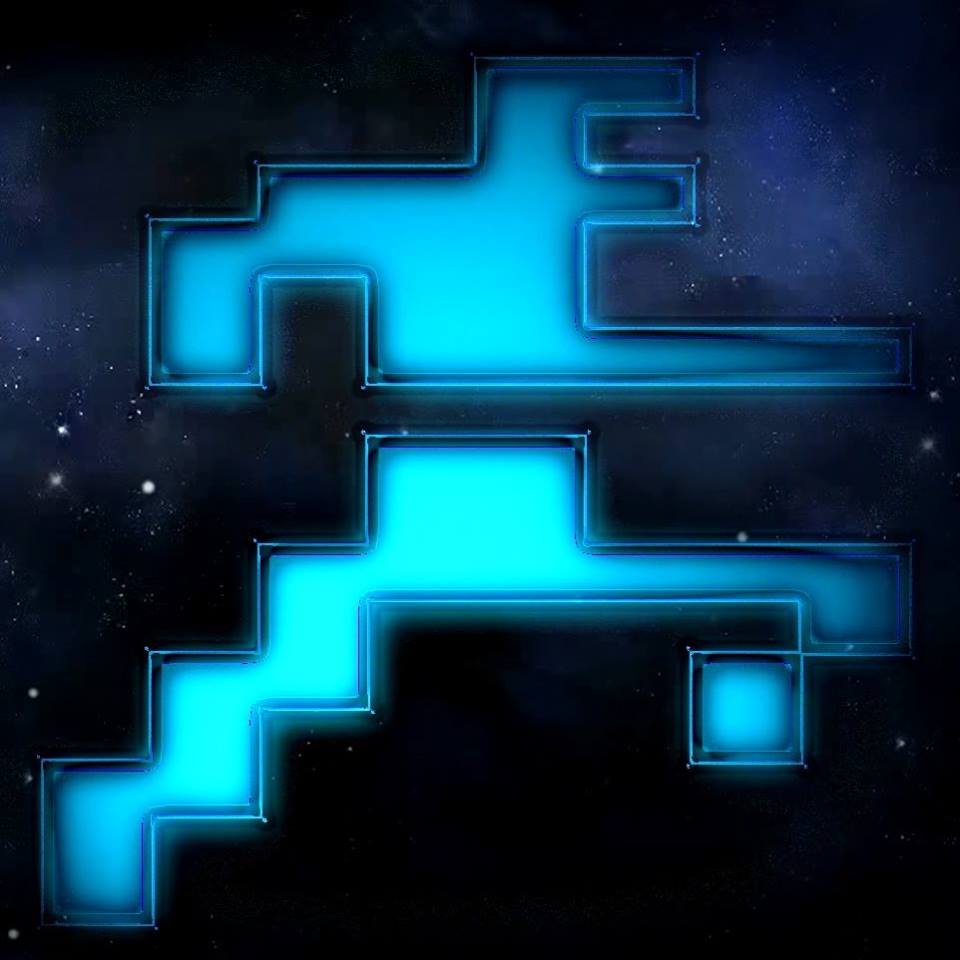 In a recent Facebook Live event, Tallarico did a Q&A where he dropped a few more details about his plans and philosophy. It was difficult to watch because the guy talks in circles. He constantly falls back on “complaints” he’s “seen around” which aren’t actually the questions anyone in the chat for said live event were asking, and answering those complaints over and over again. Dude loves talking around in circles. Still there was some cool information dropped regarding the controller, the philosophy of having the system be affordable, not launching until there’s enough games ready to go at launch (which actually won't be for at least 2 years), and the way they’ll be handling the iconic overlays with the new controller. He wants the console itself to be at a price point that makes it something every family can afford to have under their TV. He also wants the games to cost only about $5-10 each. And I’m not talking about ports of old Intellivision games. He wants people to make new, simple fun games that have the same fun factor and accessibility of the most retro of retro games, except with some modern flare. The system won’t be a powerhouse by design. You won’t be playing Call of Duty on the device. In fact, Tallarico said he wants every game on the Intellivision to be an exclusive.

Now, whether or not this strategy works is still to be seen, but the Intellivision is going to sink or swim under its own power. There will be no crowdfunding to help launch this thing. If it’s a success, it will be because his philosophy of simple games at a low price works. He said he absolutely does not want to compete with Nintendo, Microsoft, and Sony, which is good because that would be nuts, but he thinks there’s a place for a system like this, and I think I agree with him there. It sounds like he’s aiming for a very controlled version of something like the App Store, except on a device that’s built around playing on a TV with your family and friends on the couch next to you. I hope they can pull it off because I miss those days too. 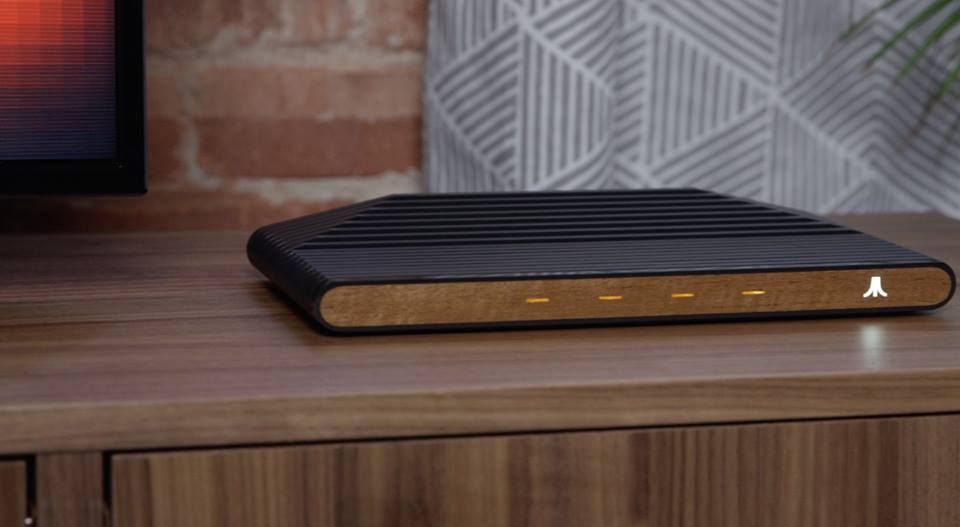 On the complete opposite side of the spectrum we have the Atari VCS. The company that brought you the speaker hat is ready to change the world again, and I’m every flavor of puzzled. See, Tallarico wants to change the gaming landscape with a very specific plan. He has an idea, he laid out that idea, and while it may be a few years from coming to fruition, his plan makes sense. Atari, on the other hand, keeps pushing ads like this one. 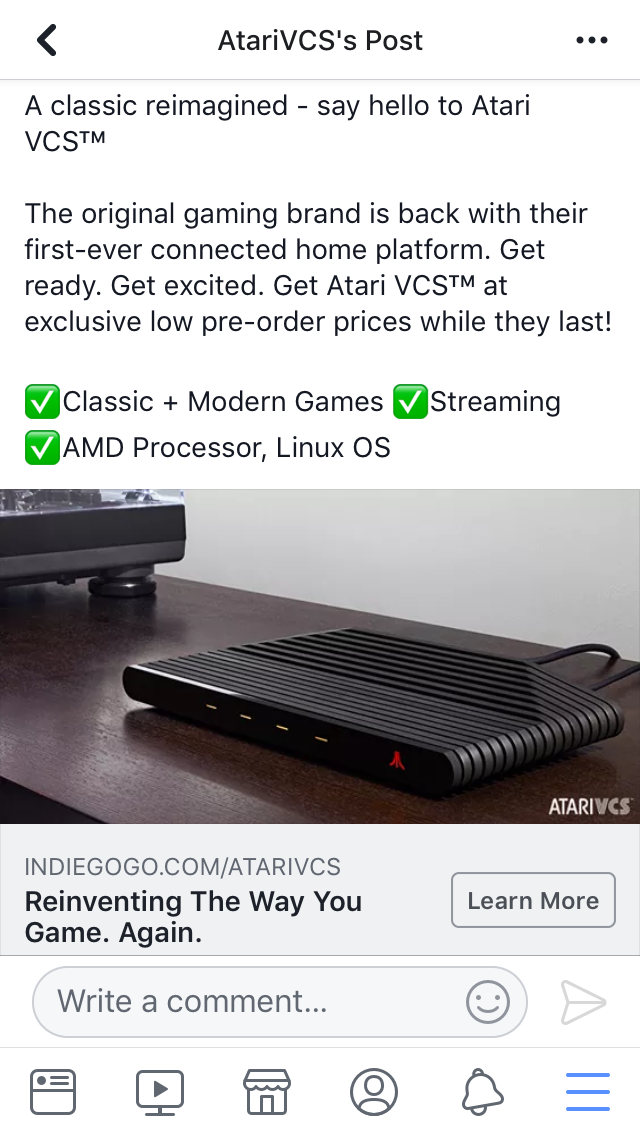 They keep saying things like “reinventing the way you game. Again.” But how? What about this system reinvents anything? Nearest I can tell, this is a Linux PC with a console style interface. It’s just as expensive as a PS4 with (from what I understand) a fraction of the power and no sort of exclusive games lineup. It’s up on Indiegogo, which means they’re relying on crowdfunding to actually launch the system, and while it may be incredibly sleek-looking, every time I see something about it I’m baffled by its existence. Whether they admit it or not, The VCS is going directly up against the big 3, and unless it does something I’m completely unaware of, I don’t see a single feature in this thing that can’t be accomplished with one of the existing consoles. Yes, the new joystick looks incredibly cool and the console features an actual piece of wood, but if I’m going to shell out $300-$400 on a new gaming console, I’d like to know it can do something the competition can’t. Apparently plenty of other people have seen something I didn’t because it’s having a remarkably successful crowdfunding campaign already. But here’s where it’s already rubbing me the wrong way. They had a couple days up on Indiegogo where they raised a shocking amount of money, and then they started pumping out these ads. I’ve been seeing ads on YouTube, Facebook, and Twitter for this thing. Those YouTube ads can NOT have been cheap, so where did that money come from? Was it some of that sweet crowdfunding money? I certainly hope not. Indiegogo isn’t Kickstarter. As far as I know, Atari gets to keep that money no matter what, even if the VCS never comes out. It’s all bluster. It’s all sleek and stylish and covered in buzzwords and testimonials, but at the end of the day there doesn’t seem to be any actual substance behind it all, which bums me out big time.

I want Atari to be a thing. The 2600 Jr. was my first game console and I still love that thing to death. But entering the console space in this day and age without something that truly sets yourself apart smells like a really bad idea to me. And can we talk about that name for a second? There already was an Atari VCS. That’s the 2600. I hate that they’re calling this new thing the VCS as well. Come up with something that honors that legacy, not replicates it. Boo. 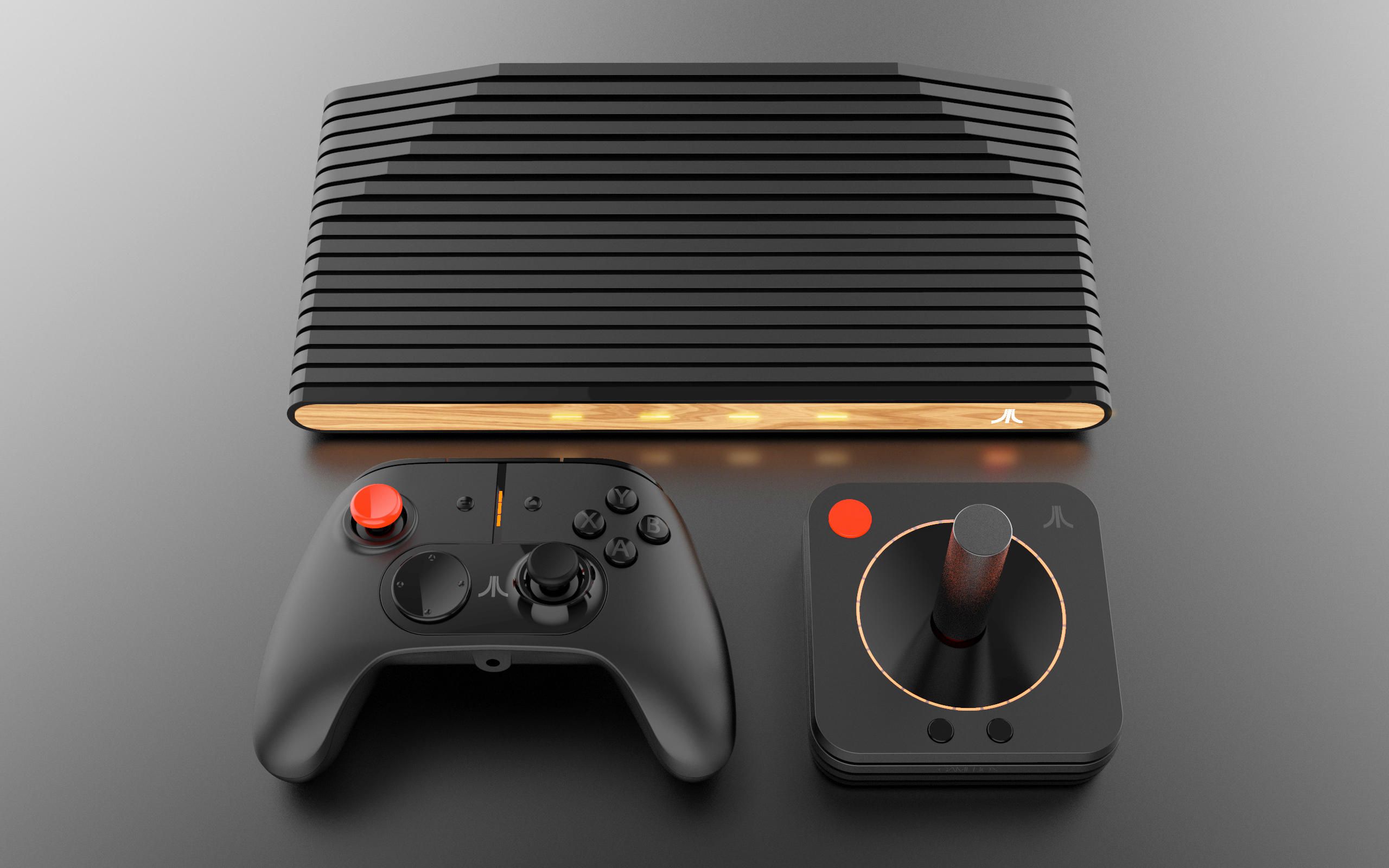 So, sometime in the next few years, if all goes according to plan for these two companies, there very well may be a new Atari vs Intellivision debate to be had. Which is weird. But maybe they’ll both find their own markets. Maybe I’ll be wrong about the VCS and it will actually change the game in a way I never saw coming. Maybe the Intellivision will fulfill Tallarico’s vision of families playing around the TV again. Maybe the Coleco Chameleon will rise once again and completely revive the OG console war. I guess we’ll see. What do you think of these two systems?