Mario Needs His Style Back

Being of a certain age (ie. old), I’ve watched the Super Mario franchise change a lot over the years. From his humble beginnings as the star of Donkey Kong, through his blocky transition into 3D, to the Super Mario Bros. Super Show and beyond, Mario has had a number of famous and often rather different-looking iterations. He’s a man of a thousand faces, as it were, but his most iconic style, the look that (at least for me) is most closely related to the franchise itself, has never actually been used as his in-game style, and at this point, it’s completely ridiculous.

This made sense in the old days, as systems weren’t capable of bringing fully fleshed out hand drawn animation to life in-game, but those days are long gone. Game machines of today are more than capable of delivering on the promise of the Mario artwork of old, and the thought of actually playing something that looks anywhere near as cool as that is enough to get anyone’s imagination running wild.

A World of Imagination

Super Mario box art was the stuff dreams were made of. The expression, the colors, all of it was just so darn cool. Just look at this magic. 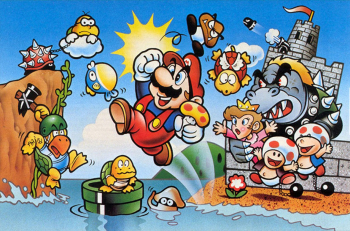 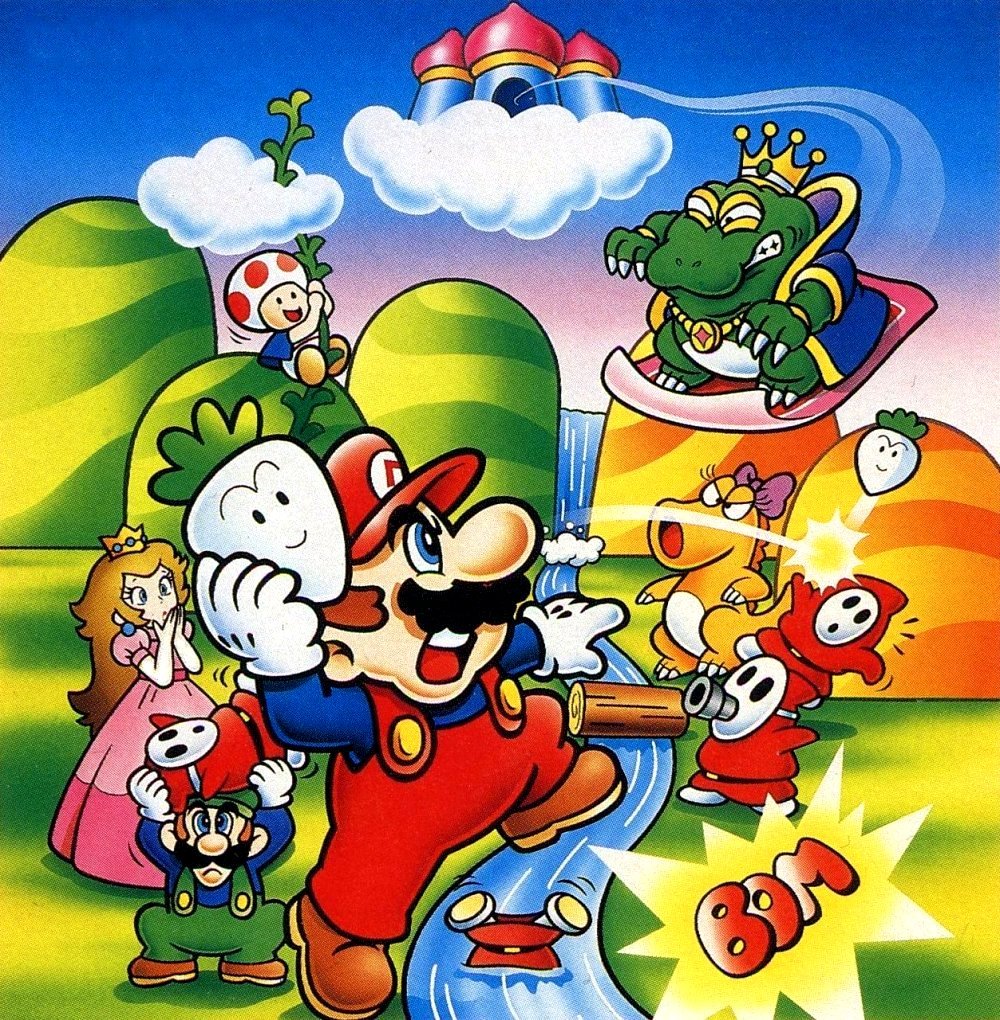 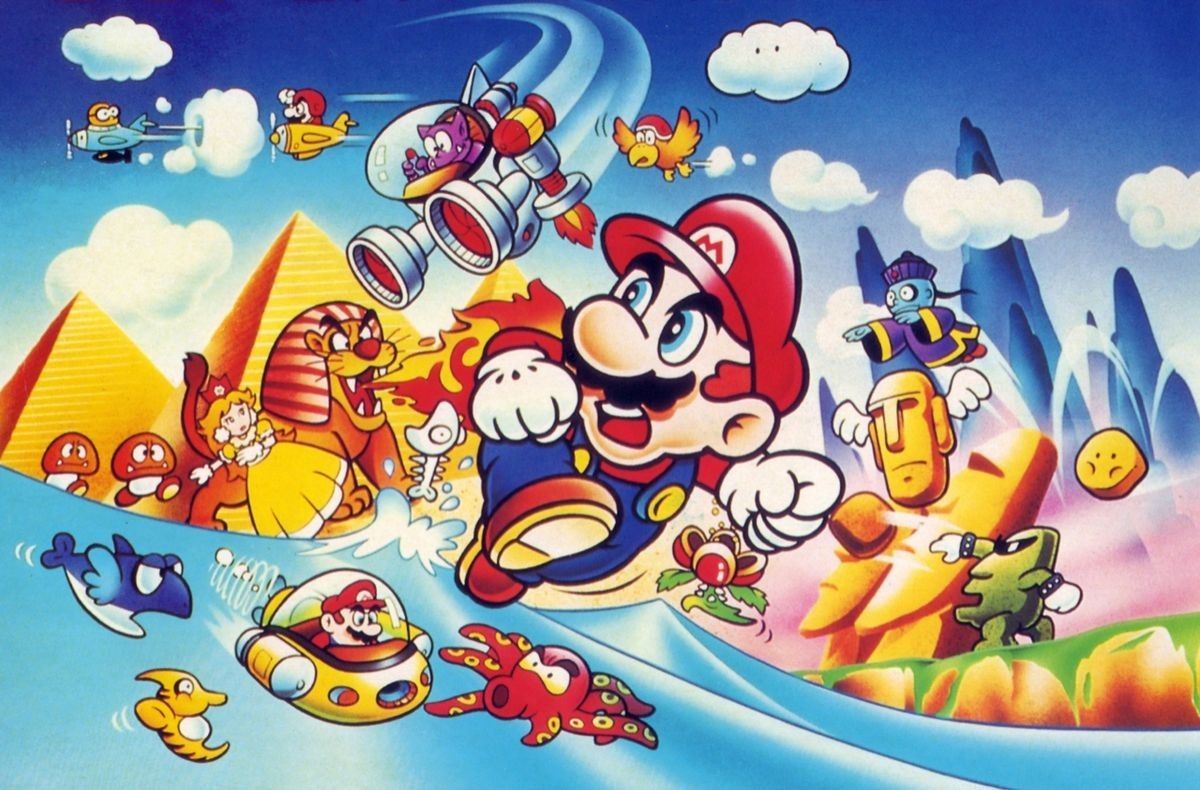 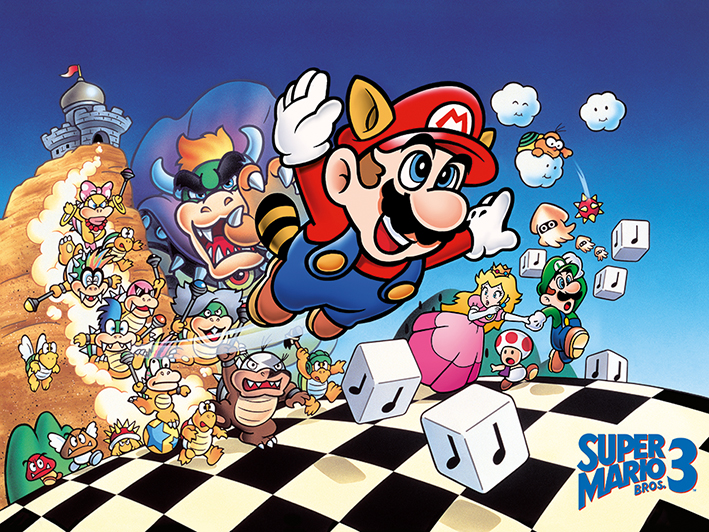 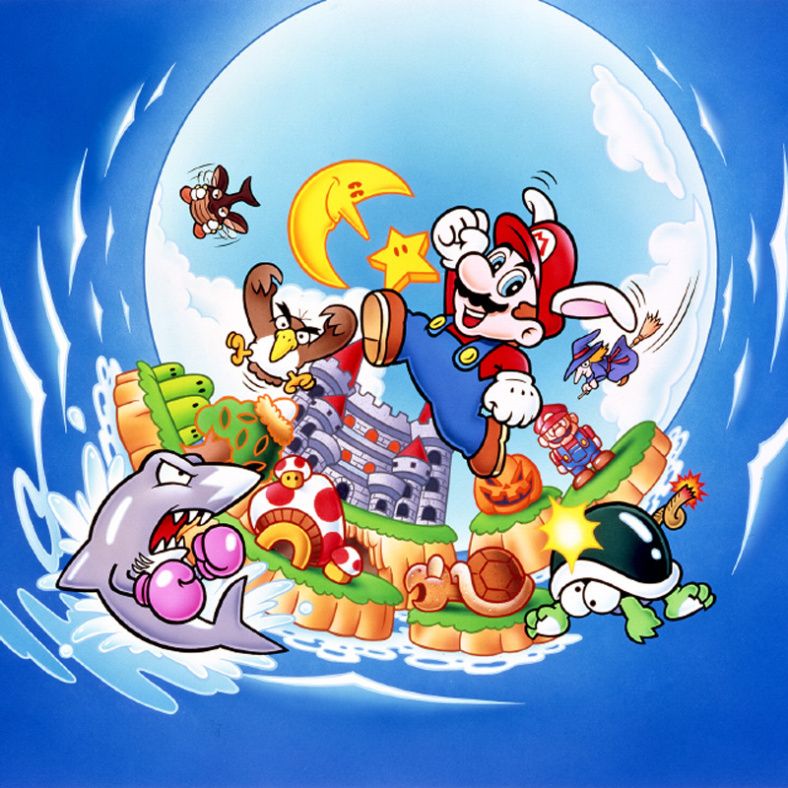 Once things went to 3D though, Mario’s iconic box art look and its incredible accompanying art direction went the way of Wart, which is to say it was cast aside in favor of the 3D rendered stuff that was all the rage back then. 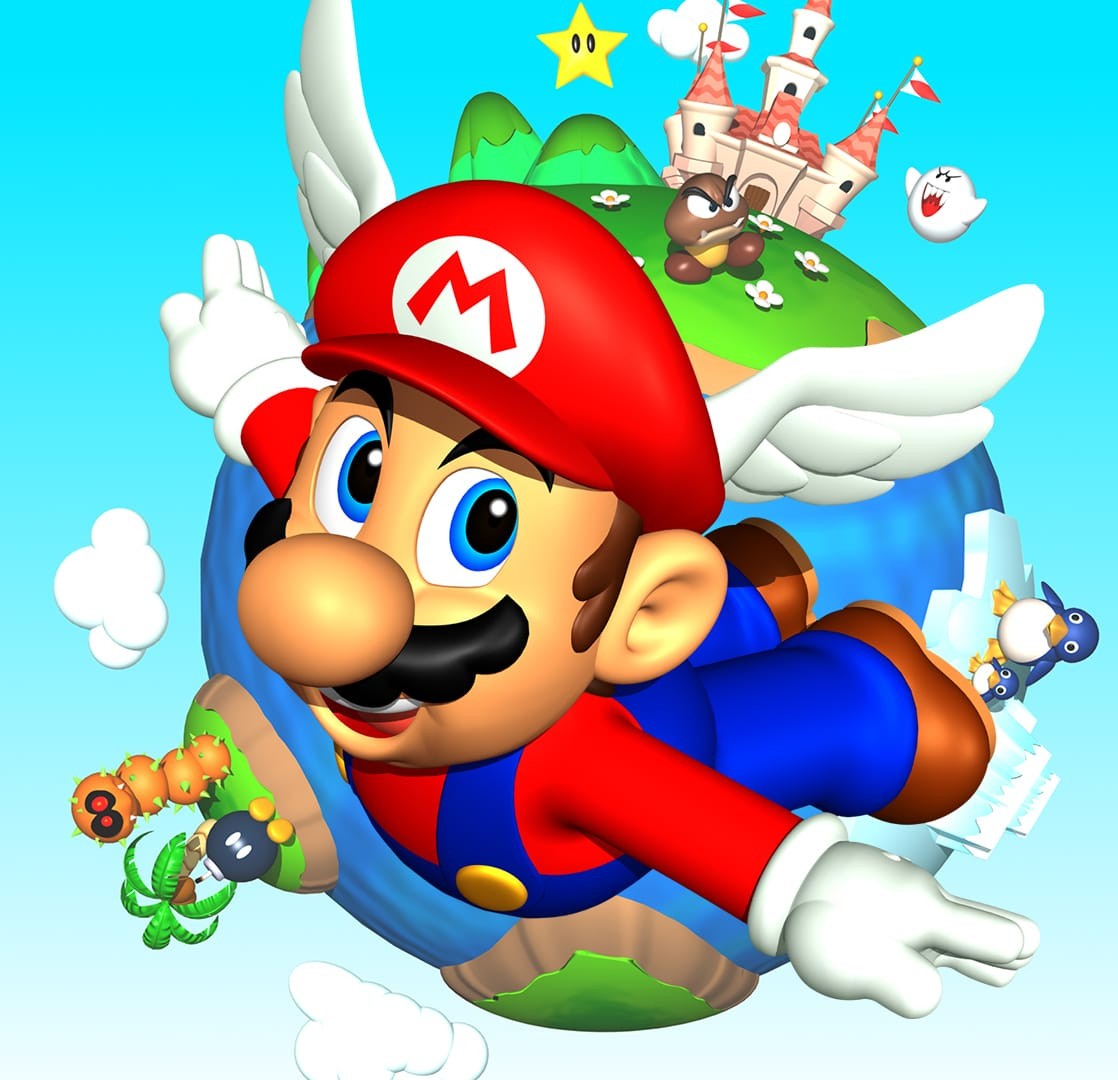 Don’t get me wrong, there’s still a degree of magic in this kind of stuff. However, we eventually got this stuff more or less represented in-game. Modern Mario all basically takes the “standardized” Mario art style and makes it exist in livable, playable 3D and 2D worlds.

That original hand drawn art though? We’ve never had a proper Mario platformer that utilizes it. The closest we’ve come is the character profiles in Super Mario 3D World, but even that’s just used in menus. 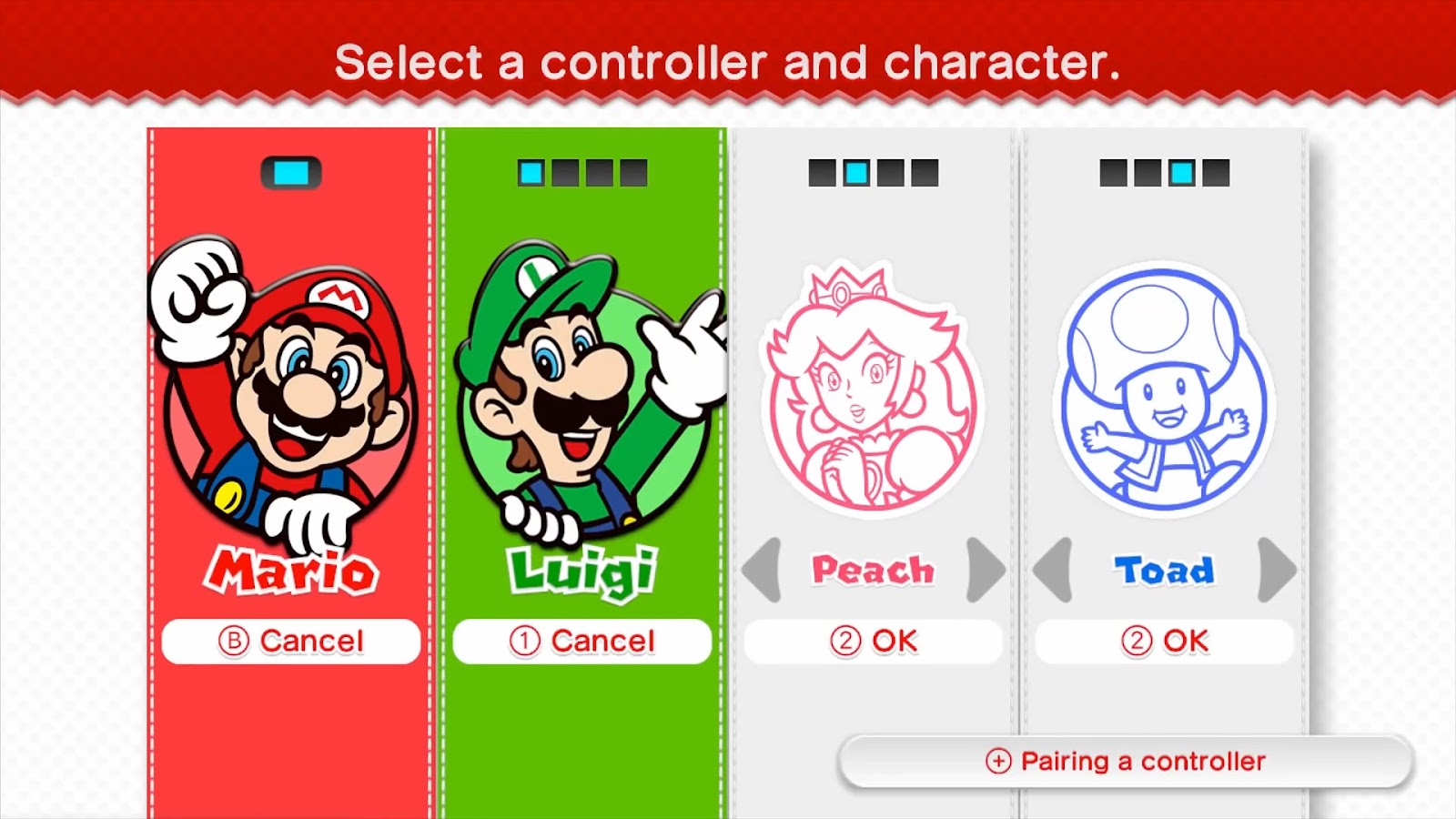 Now look at how far we’ve come in terms of using traditional hand drawn animation in games. Back on the Wii, we first started seeing games like A Boy and His Blob from WayForward or even Nintendo’s own Wario Land: Shake It show the world that not everything needed to be either retro-sprites or 3D rendered Pixar-looking stuff. Now in this current generation we have games featuring traditional animation as bonafide hits like Streets of Rage 4 and Cuphead. Hand drawn animation can make some truly breathtaking games, and there’s no franchise on the planet begging for this kind of imagination more than Nintendo’s premiere plumber.

Before the New Super Mario Bros. series took over, 2D Mario games were among the most creative experiences Nintendo produced. The worlds were wild, the characters and creatures were full of personality, they were just pure imagination in video game form. For as fun as the New Super Mario Bros. games are, they completely lack the sense of wonder that used to come with a new Mario game. That wonder isn’t gone completely, as the 3D Mario games have been delivering in spades on the imagination front, Galaxy and Odyssey in particular spring to mind as shining examples.

But now think back to something like New Super Mario Bros. U, which is often considered the best game in the NSMB series. The best thing that can be said about it from a visual standpoint is that the Van Gogh themed stage looked pretty neat. Very little else in the entire game can hold a candle to what was pictured on the box art for a game like Super Mario Land 2. That’s not to say New Super Mario bros. U looks bad per se, just that it lacks that something special that used to make 2D Mario game releases something truly special to look forward to.

We’ve actually come pretty close to the reality of a hand-drawn Mario game a couple of times, just not in a traditional 2D platformer sense. The Mario RPG spinoff series, specifically the Mario & Luigi games, feature some truly brilliant sprite work. Having started out on Game Boy Advance, they were originally still very much video game pixelated sprites. When the DS came out though, that sprite work improved instead of trying to maintain some sense of pixelation or making the characters rendered in 3D. By the time the 3DS rolled around, I mean just look at this. 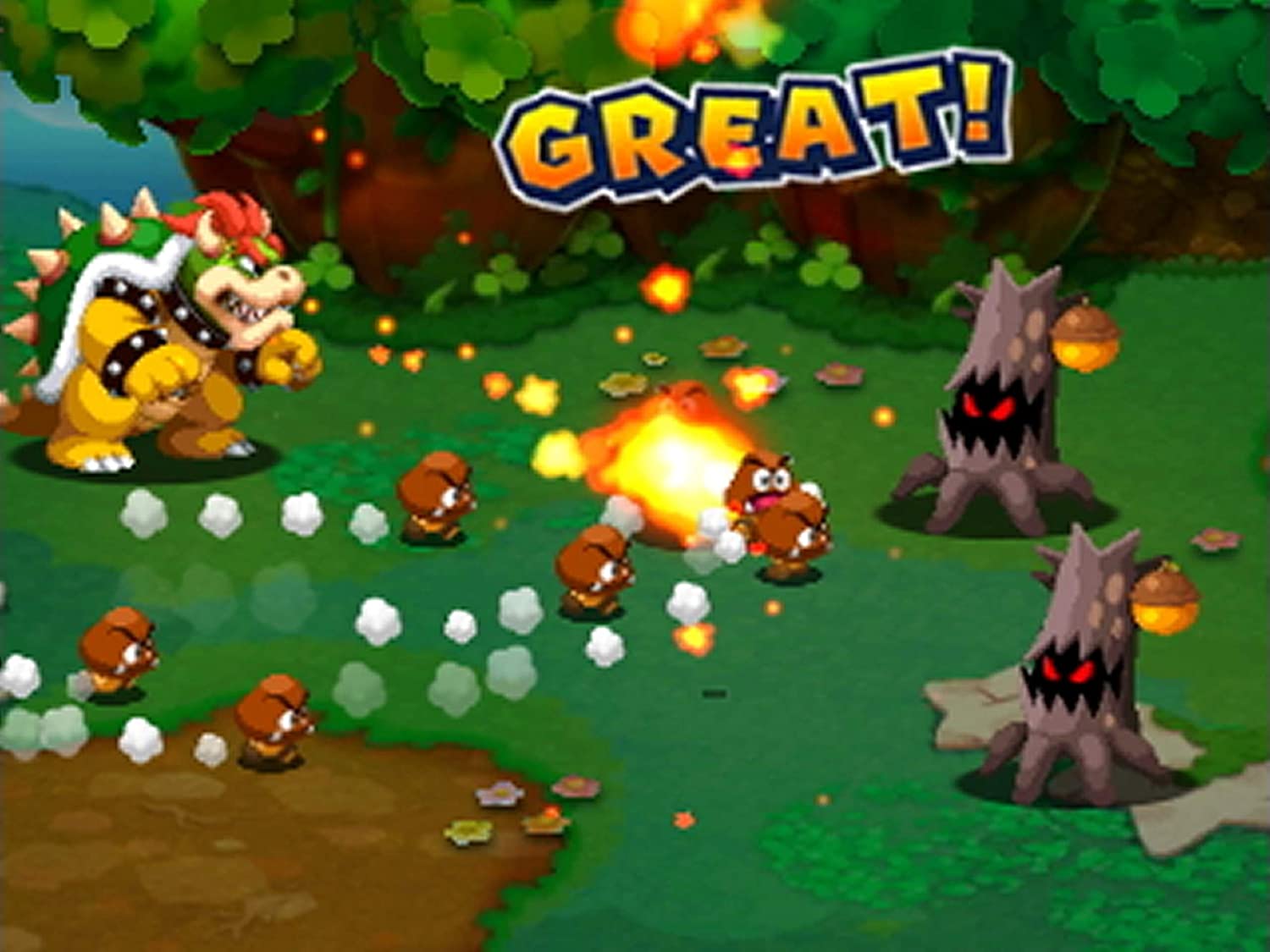 These games weren’t exactly sales juggernauts, especially the later remakes, but the art direction on them was such a joy to behold. Seeing Mario and friends animated in this style was wonderful. Now if we could apply something similar to a proper 2D Mario platformer, we’d really be in business.

And you know what? While we’re here, let me also say that if we were to get a new hand drawn Mario game, let’s sideline Bowser for a while. I’ve said this a thousand times before, but Mario used to have a rogues gallery. Sure he faces off against all manner of nutjobs in the RPG games, but his mainline adventures have become all Bowser all the time. We used to have Wart, Tatanga, and Wario as well. I say it’s high time Nintendo created a brand new Mario villain. Or at the very least, let us face off against Wart or Tatanga once more. Revisiting Subcon or Sarasalans would be amazing. Heck, I’d be thrilled with a proper Wario & Waluigi villainous adventure. Can you believe Waluigi hasn't been a proper villain outside of a flipping sports game for crying out loud? Bowser’s been done, and he’s an awesome character. But how cool would it be to put him on ice for a little while? Let Mario and friends tangle with some other foes for a while. Then, usher in a grand return! How much fun would that be? Bowser is like The Joker. And Nintendo has been using him to death. Yes, Bowser’s Fury was freaking outstanding, but we’re way past due for a Bowser break. Let him just chill and spend time playing games with his son or something. 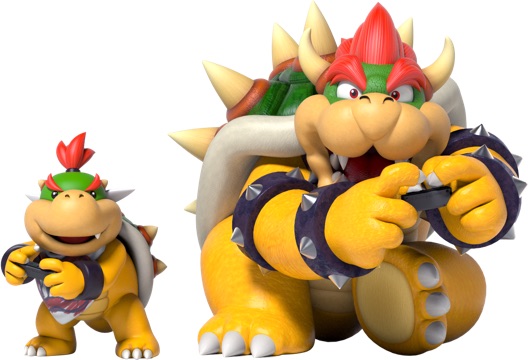 And while we’re sidetracked, how about giving the whole “Peach is kidnapped” thing a rest? She got some brief time off during 3D World, and that was great, especially since it meant she was a playable character. So I say let’s keep that going, and while we’re at it, get all sorts of playable characters with unique abilities in there too! Rosalina was awesome to play as in 3D World, but you couldn’t do it until the end of the game. How about Toadette? Or even Wario and Waluigi if they aren’t playing the villains? Build the game around using the different characters to unlock specific secrets and stuff like in a Kirby game, and maybe make it so you can swap characters on the fly if you’re playing single player? I don’t know, I’m just spitballing here, but no matter what it would all look great with hand drawn animation.

If ever there was a time to bring a game like this to market, it’s now. The video game market is poised to have an absolutely insane year, even with Breath of the Wild delayed, but it’s only April, which stands to reason there are still at least a handful of big name games still to be announced. Heck, a brand new Monkey Island game was just announced! Anything is possible!

With the Switch’s lineup focusing on names like Pokemon and Xenoblade for this holiday season, it would be nice to have something to slot into that Zelda shaped hole, and a brand new 2D Mario that reinvents what 2D Mario can be, akin to the likes of Breath of the Wild, Odyssey, and even Forgotten Land, would be pure perfection.