Walkin' in a winter wonderland

It’s officially Winter here in the northern hemisphere, and that means it’s getting cold out there. No better time to sit inside and enjoy some great video games, right?

Of course, a hallmark of some of the best classic video games is the ice level, and when done right, those can be incredibly memorable. Unlike water levels (which are almost always the worst part of whatever game they’re in), ice levels can be difficult, but in a more fun way. Things are slippery, there’s almost always great music, and the stages themselves tend to be some of the most visually beautiful there are.

There are tons of great ice levels out there, but in celebration of the winter season, I thought it would be fun to look back at five of my favorite ones. Grab your mittens and let’s go! 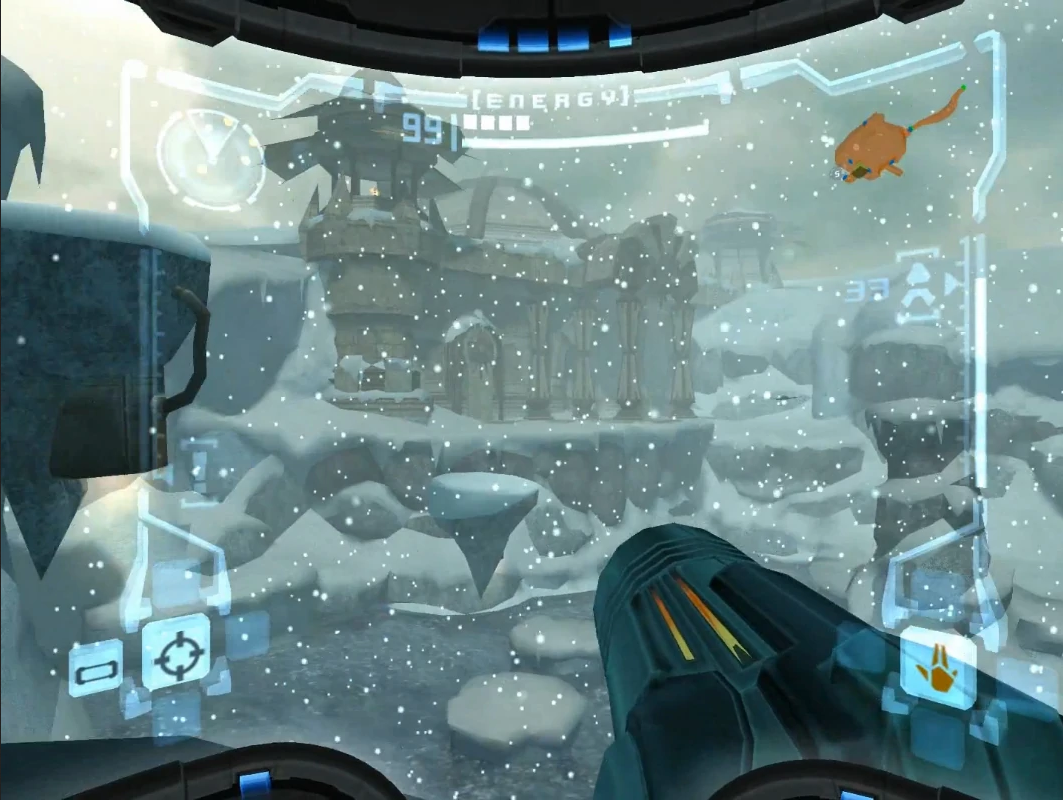 Metroid Prime is a remarkably beautiful game, even by today’s standards. Its art direction is simply stunning, and while the rest of the games on this list are decidedly more retro (no pun intended) this is always the first one that comes to mind whenever I think of ice levels in video games.

The moment you get there, the music and visuals combine to set the perfect mood. There’s danger here, but there’s also an air of quiet in that opening area. Like any of the best Metroid games, it skates the line between beauty and terror.

Then of course there’s the Baby Sheegoth creatures. They’re such awesome little monsters, and they’re really fun to battle. And let's not forget Thardus! This entire game is a masterpiece, but Phendrana Drifts is a real standout. 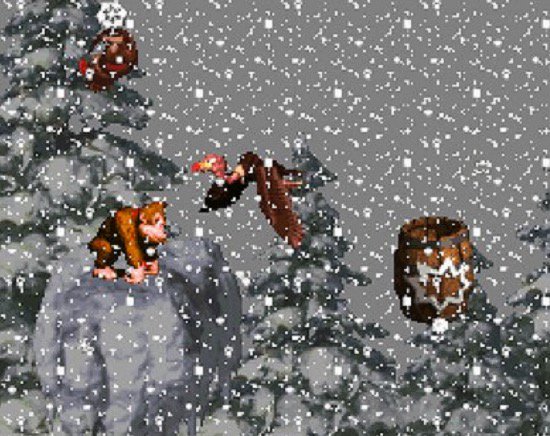 The first Donkey Kong Country will always be my favorite in the franchise because of nostalgia. Tropical Freeze is unquestionably the better game, but there was nothing quite like the unbridaled hype surrounding Rare’s reinvention of Nintendo’s First Ape.

But even barring the astonishing greatness of Tropical Freeze, not even the Super NES sequels stack up to the first DKC for me. Not that they were bad by any means, they just felt different. That first one has a weight and rhythm that the others can’t match, and as much as I love Dixie Kong, nothing beats the Donkey/Diddy team. That, and Kiddy Kong is awful.

But back to snow specifically, DKC had two ice levels that blew my mind. Slipslide Ride is one of my favorite levels in the game, and its ice cave aesthetic is fantastic, but even more impressive to me was Snow Barrel Blast.

It’s a really great looking stage to begin with, but the weather change was mind blowing. It starts way in the distance, and a gigantic snowstorm gradually makes its way to the front of the screen. There’s I think 10 different layers of snow blowing by at once when the storm is in full effect, and that’s just nuts.

The level itself is super fun too, with a great long barrel blasting segment that awards you a special 1-up balloon if you can do it perfectly, but when you do the rest of the level without interruption, another special thing happens.

The music actually matches a straight run in this level remarkably well. It changes and becomes more chaotic as the snow picks up. It’s quite an experience. 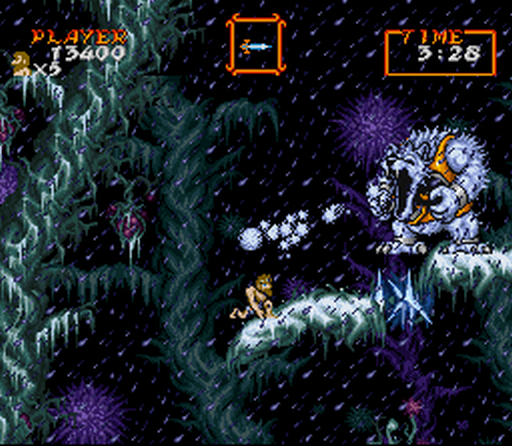 Sticking with the Super NES, Super Ghouls n Ghosts is another one of those games that skates that line between beauty and terror insanely well, especially considering its vintage. Stage after stage of incredible orchestrated music blaring out of your SNES accompanied by some absolutely top notch art direction made the game an instant classic, but then you get to the Ice Forest stage and wow, just wow.

The music starts off all reserved and pretty, and then these creepy strings come in, and coupled with the unusual cadence of the song, you’re left with an uneasy feeling that matches the stark visuals.

A light snow fills the air, while these beautiful flowers grow and shoot deadly spores at you. There are avalanches, growing ice crystals, and a gigantic ice monster boss at the end too. It has everything, and the ground isn’t even that slippery! 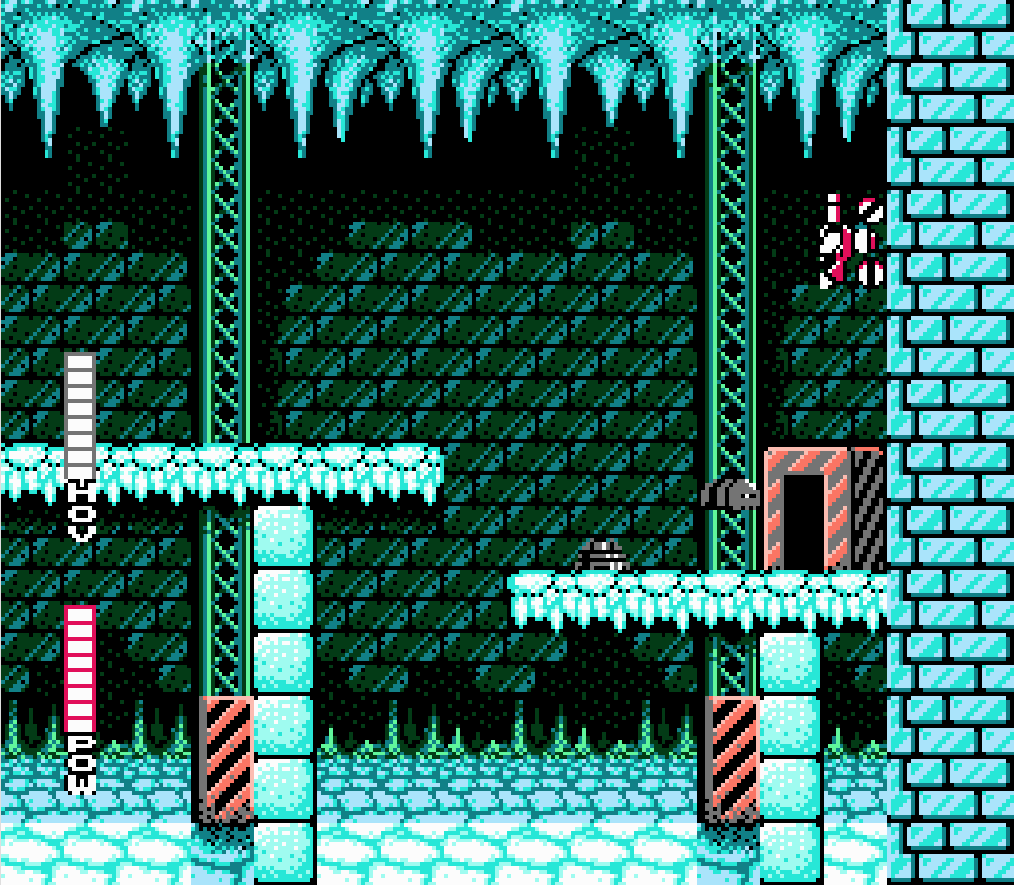 Stepping back to the NES, Area 6 in Blaster Master is one of the best ice levels there is. It starts with some very uncharacteristic Ice level music. Instead of being twinkly and light, it’s super aggressive right off the bat, but once the song gets going properly it pulls back just enough to keep its intensity but also remain incredibly cool.

The stage itself seems to be made from some sort of frozen over factory-esque facility with orange and black striped caution patterns strewn about. The ground is slick, and your tank’s wheels spin accordingly to fantastic effect.

In the overhead segments, there are slippery icy surfaces that threaten to slide you into spike pits in an instant. It’s got a super cool-looking boss too.

But the best thing about this area is finding your way out of it when you’re done. The powerup you get is the intensely cool “Wall” ability, which allows your tank to crawl up the walls. This power is made even cooler when you get the ceiling extension later on, but regardless, it remains one of the coolest power ups of all time. 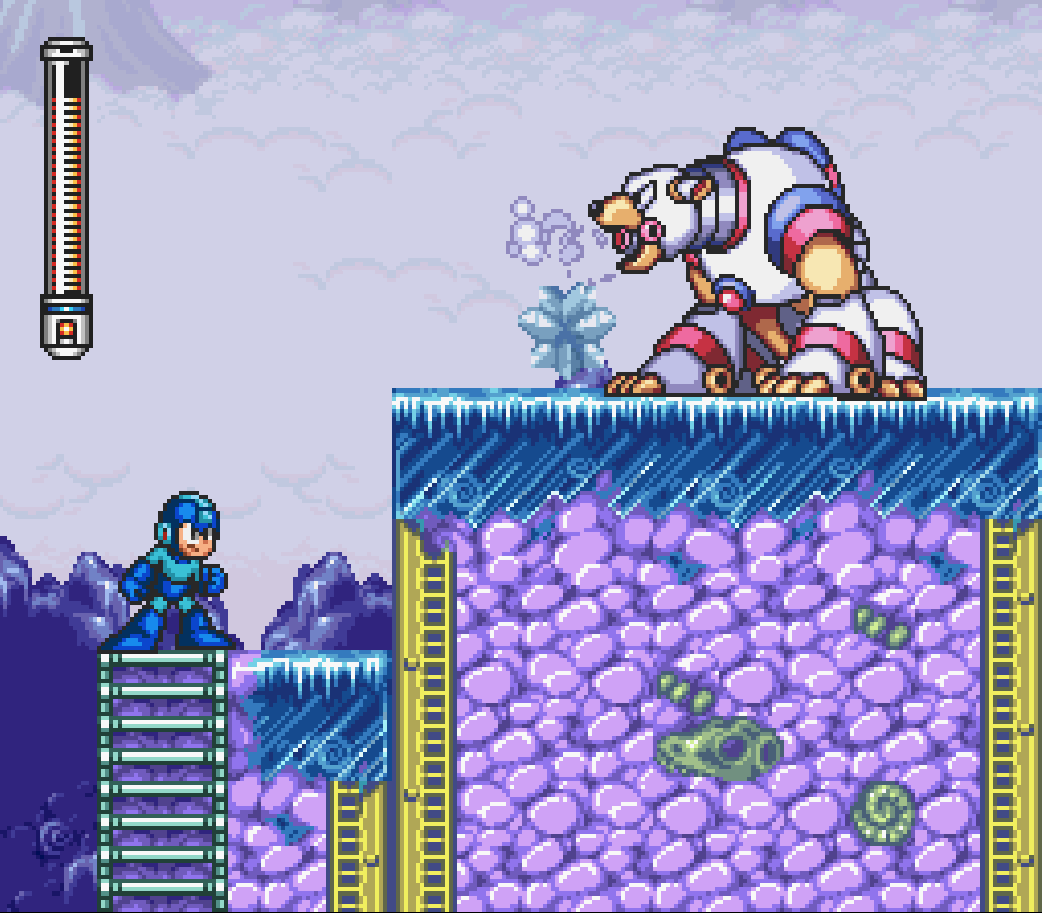 Mega Man 7 gets a lot of flack, and I’ve never understood it. Yes, the sprite sizes change a lot about the way it feels as a Mega Man game, but I always found the tradeoff to be worth it since the spritework is absolutely gorgeous.

This is extra apparent in Freeze Man’s stage. The polar bears are among the most memorable giant monster enemies in any Mega Man game. They’re just plain awesome.

Like most Mega Man stages, the area doesn’t make much sense, but it looks cool as heck so it doesn’t matter. You start out in an open area with some snow covered trees behind you, but as you progress you find yourself inside several ice caves with robot dinosaur bones frozen in the background. Why frozen robot dinosaur bones are even a thing defies all logic, but whatever, it looks cool as heck. There’s even a deeper cave area with these cool waterfalls and techno tower looking things in the background. It’s great.

The music is fantastic as well, all leading up to the undeniably cool Freeze Man himself. It’s classic Mega Man at its finest.

Naturally, these were just the first 5 I thought of. There are plenty more. Heck, I didn’t even get to Icecap zone from Sonic 3, or the FreezeFlame Galaxy from Super Mario Galaxy. So if you find yourself buried in snow this season, curl up by a warm video game console and enjoy some great ice levels.

What are your favorite winter themed stages?