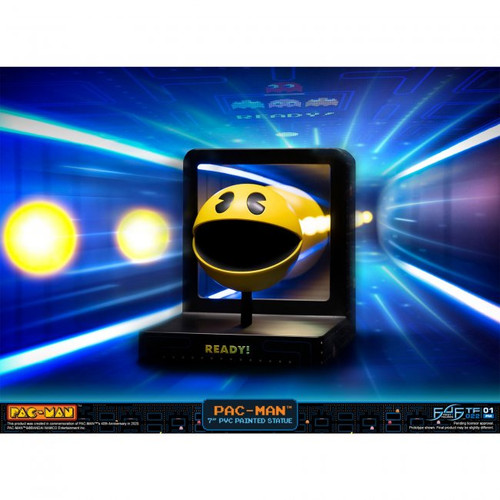 In celebration of PAC-MAN's 40th anniversary, First 4 Figures is proud to introduce their very first PVC collectible for the series, PAC-MAN PVC! To pay homage to the beloved classic design of PAC-MAN, we decided to recreate the original PAC-MAN maze in 3D form, the highlight of which is the infinity mirror base! The four blue LED light strips at each corner represent the walls of the maze, and the single LED light in the middle gives off a Pac-Dot trail illusion thanks to the infinity mirror. The base itself is designed with the PAC-MAN maze, which includes details such as the Pac-Dots, some of the ghosts, and even the cherry! As for PAC-MAN himself, he can manually be rotated to either face front or face the PAC-Dots as if he were about to eat them. PAC-MAN PAC-MAN PVC painted statue (manually rotatable) * Infinity mirror base * Designed with the original PAC-MAN maze * Pac-Dot trail illusion via an LED light * PAC-MAN maze wall illusion via four (4) blue LED lights * (Rechargeable 18500 Li+ battery and USB-C cable not included) * Collector's box * F4F leaflet with 500 F4F reward points included