When we left off, I had a CD-i, a crappy controller, a stack of awful discs, Hotel Mario, and no Zelda games. Things stayed this way for a long time. Years passed, and eBay became a thing. I would periodically look for the CD-i Zelda games there, but they were always way too expensive. By this point, I had learned that thees games were actually nothing like I had imagined them to be, and were in fact quite terrible. But being the rabid Zelda fan I am, I still wanted desperately to play them myself, just not enough to pay eBay prices. Still, my resolve wsa strong. I didn't care how long it took, I would remain vigilant and eventually find these games and play them all. But mother nature had other plans.

I have a pretty big video game collection, and as an ex-FuncoLand employee, I decided to keep my game consoles in individual cardboard boxes, just like we used to do back in my store. Each console had its controllers and accompanying wires boxed up with them, so if I wanted to play a system, all I needed to do was grab the box, and everything I needed was right there. I've always been limited on space though. For many years, my collection was largely kept in a storage unit, but by 2010, the apartment I was living in had a basement, and I was finally able to take all my stuff out of storage and keep it under my own roof. It was pretty tight, and things still had to remain boxed up for the most part, but if I ever wanted to play something, it was right there for me to grab. I had my console boxes stacked up pretty high, and in an effort to stop the boxes from collapsing in on themselves, I kept the heavier/less played consoles at the bottom. CD-i was my bedrock, because that thing weighs a ton. And this was the status quo. Everything was well-organized. I had just finished collecting my complete run of Nintendo Powers. I was sitting on top of the world. And then 2011's Hurricane Irene hit.

I had never lived in a place with a basement before, so the concept of a sump pump was a foreign one to me. When we moved in, I didn't pay much attention to my landlord when he told me how to use the thing, and every time we had crazy rain, everything in the basement seemed fine. I distinctly remember the night Irene hit thinking to myself before going to bed "I should grab a few things and bring them upstairs... Nah, I'm sure it will be fine." I woke up the next morning, went down to the basement to check on stuff, and to my horror, one of my empty console boxes came floating by. There was well over a foot of water flooding the basement. About half of my freshly collected Nintendo Powers were now thoroughly soaked, as was everything else that had been touching the floor. That included my CD-i. 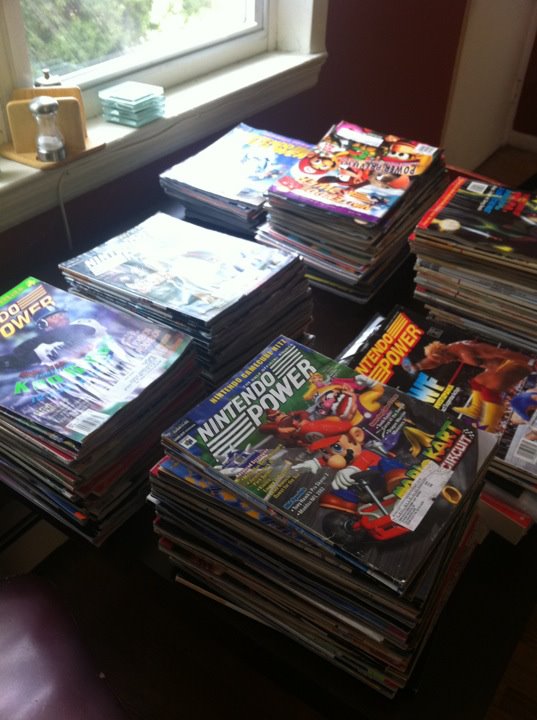 One of the saddest pictures I've ever taken. More than half of them couldn't be saved.

A day or so after the flood, I managed to get everything dried out. One of the first things I tried out was my CD-i, because I knew replacing it would be an expensive endeavor. I plugged it in, hoping for the best, and to my surprise, it turned on! There's still hope! I immediately grabbed Alien Gate (because if the system did something funky, I wouldn't exactly be heartbroken at that game's demise) and went to put it in the console, but the door wouldn't open. I messed with it for what felt like hours, but no matter what I did, I couldn't get it to budge. My hope faded into sadness. My CD-i games themselves were still safe, but my Zelda Quest seemed like a lost cause now. How was I going to be able to justify buying a whole new CD-i just so I could play these terrible games I didn't even have? I boxed the CD-i back up, thinking to myself that maybe if I let it sit for long enough, it may dry out even further and maybe work again someday. I spent the next few months restructuring my storage solution to plastic bins instead of cardboard boxes, just in case flooding hit me again, and making sure I knew exactly how to use that sump pump. The quest would have to be put on hold.

Then, about a year later, on a random afternoon, when I least expected it, 2 parts of the Unholy Triforce appeared before my eyes.

I used to regularly visit a great local game store called Digital Press. They managed to get in all sorts of great, weird stuff all the time, and even when I couldn't afford it, it was still cool to just walk around and see what they had. So, on this random Sunday, I wandered into Digital Press and sitting in their display case was Link: Faces of Evil and Zelda: Wand of Gamelon. I asked the gentleman behind the counter if I could see them, and he happily obliged. He told me that they had just come in a few hours ago, and they hadn't even put price tags on them yet. When he put them in my hands, I was in awe. They were flawless! I had seen a bunch of these show up on eBay over the years, but they rarely matched. There were always oddly shaped ones from Europe or wherever, especially of Wand of Gamelon, but these were perfect NTSC matches! Cardboard sleeves, instruction manuals, the whole shebang. I asked how much, and he told me $100 for the pair. I said to myself "This right here? This is why credit cards exist." Without hesitation, I told him I'd take them both, and a quick swipe of plastic later, I finally had 2/3 of the Unholy Triforce. 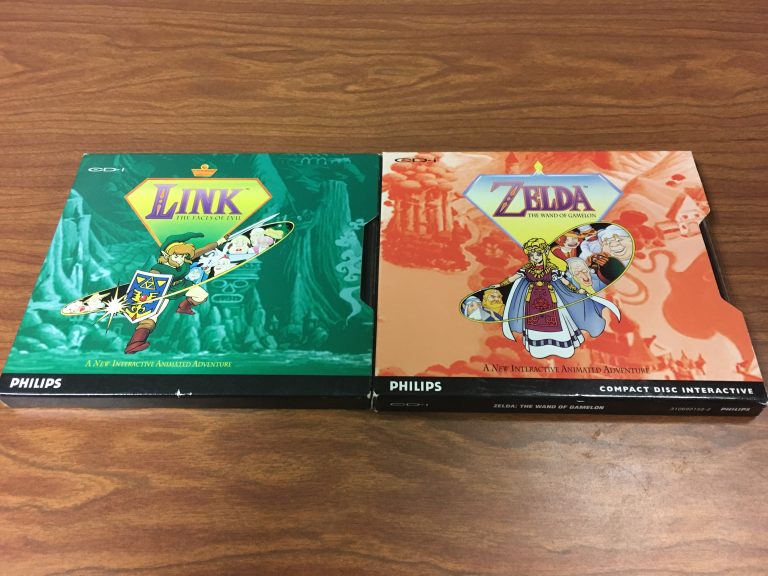 I raced home, positively glowing from my purchase, and ran straight down to my basement. I hooked up my ol' CD-i, put some fresh batteries in the dumb-ass wand thing, and crossed my fingers. Would the gods smile upon me and let me try my new games? Nope. Still no functioning disc drive. But I was undaunted. I finally had what I had been searching for for so long. There had to be a way to complete my quest.

I quickly became obsessed with figuring out how to replace my CD-i. I spent a lot of time on eBay looking for a good deal on a fresh unit, and one day I came across an auction for a repaired unit. I contacted the seller and asked where they had the unit repaired, and was greeted with a lovely response from a strange yet friendly man named Ronald. He lived in The Bronx. I told him my story and what was wrong with my unit, and he offered to fix my unit for $60. Granted, shipping this thing out to the Bronx was likely going to cost a pretty penny, since it weighed to darn much, but in a coincidence that I still have a hard time wrapping my head around, his mother-in-law, who he regularly visited, just so happened to live in the town where I worked at the time! He came by my job, picked up the CD-i personally, and had it back to me in a couple of days, working good as new. Not only that, but when he returned it to me, there was a little something extra in the box.

What a mysterious disc.

Turns out, this guy used to work for Philips, and has a ton of CD-i knowledge at his disposal. After hearing my story, he tossed in, free of charge, a copy of Zelda's Adventure. It was just a copy, mind you, not the actual retail release with the box and manual, but it was a disc with the full game on it, that played in my CD-i. CLOSE ENOUGH FOR ME! Not only was my CD-i now working like new, but I finally had all 3 parts of the Unholy Triforce! All that was left now was to plug it in, turn it on, and play, right?