Hardware revisions are all the rage in the news again! And how about that Switch Pro, eh? That particular rumor didn’t exactly pan out the way a lot of folks wanted it to, but whether or not it’s for you, the Switch OLED does look pretty neat, especially for folks who primarily play in handheld mode.

So it once again got me thinking of cool hardware revisions throughout history. We did this a few years ago when the Switch Lite was announced, so why not, right? There are a ton of great hardware refreshes out there, so let’s have some fun looking back at some of the neat ideas companies came up with to keep their consoles on store shelves. 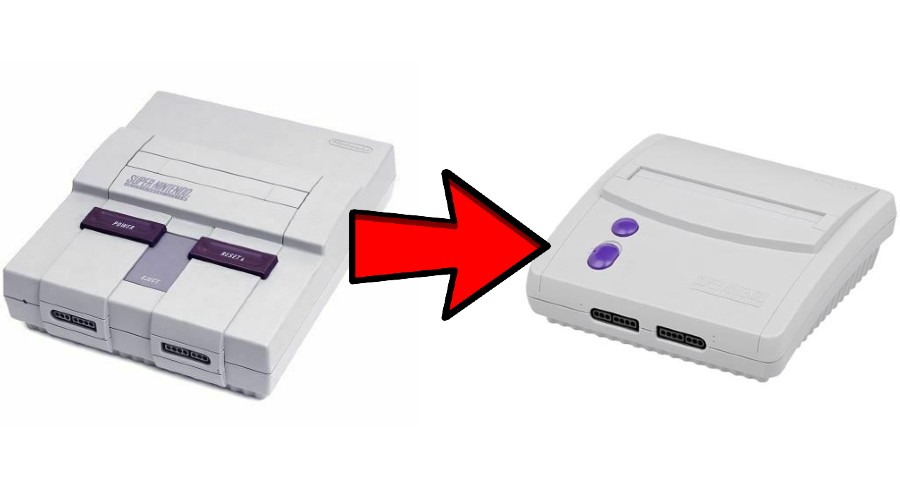 I’m not sure what the “official” name for this one is, but for the longest time folks referred to this as the SNES mini. That is, until Nintendo released their Super NES Classic Edition and everyone started calling THAT the SNES mini. Regardless, this little guy packs a punch.

While the original is without a doubt the superior model, there’s still a lot to like with its little brother. The smaller footprint is nice, and these units don't seem to yellow quite as much as the originals did. It’s also a much sleeker looking console overall with fewer sharp angles and the smooth arched top section.

Yes, I miss the LED power indicator light, and that super cool eject button, but in terms of having a SNES console on your shelf that takes up less space and just looks really nice, this isn’t a bad route to go. It even came with a unique controller that had Nintendo’s logo embossed in the center instead of the Super NES logo painted on. Nice! 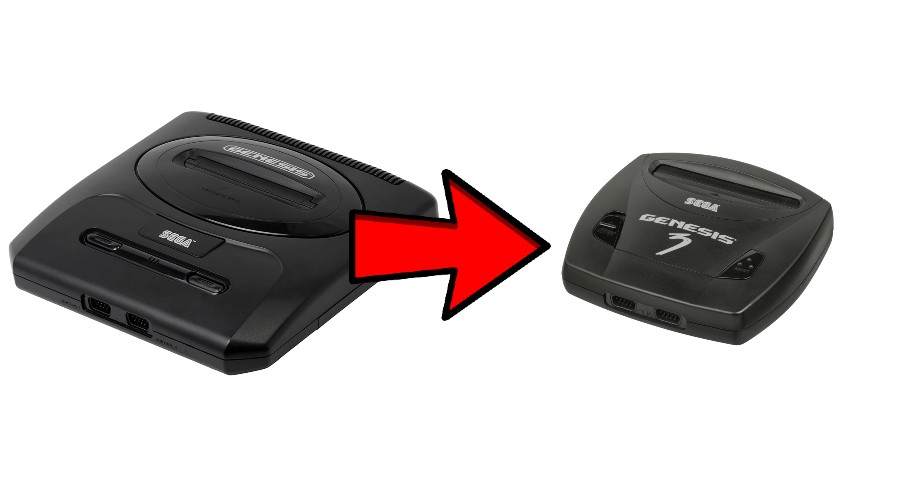 The Sega Genesis 2 was an interesting beast. It didn’t sound quite as good as the original Genesis, but it was a super sleek-looking design, especially when compared to the Super NES. The Genesis 3 though, is bonkers.

If you’ve never seen one in person before, it’s kind of hard to wrap your head around just how small it is. It may not seem like much of a feat these days where supercomputers fit in your pocket, but back then having a functional Sega Genesis about the size of a portable CD player was kinda crazy.

In fact, they arguably went a little too far in the shrinking department because the system is so light the tension of the wires used to hook it up to the television is strong enough to actually move the system around.

It doesn’t play well with any of Sega’s add ons, like the Power Base Converter, 32X, and Sega CD. That’s not to say there aren’t ways around that particular limitation, just that it isn’t as easy as you’d hope.

That said, it’s a fascinating little device. It may not be the best way to play Genesis games, but if you like collecting consoles, this is a must have. 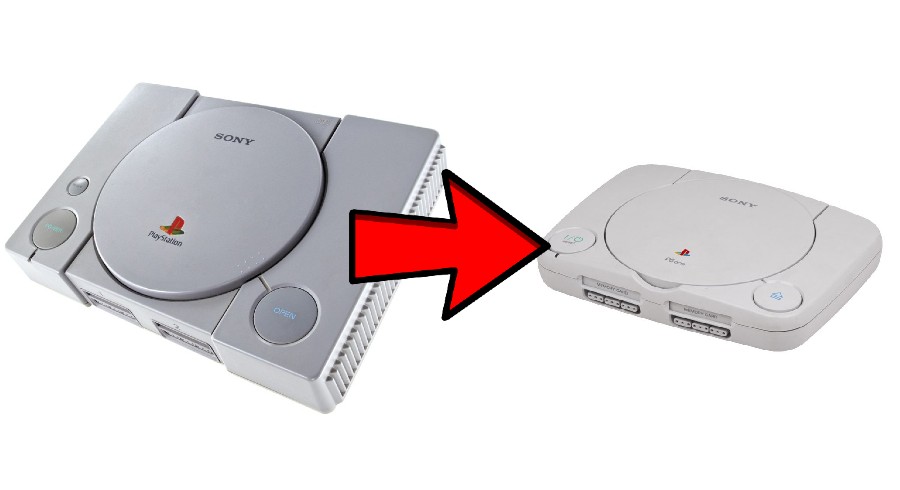 Speaking of tiny consoles, after the borderline insane levels of success the PlayStation 2 experienced once it hit the market, Sony looked back at their aging PlayStation 1 tech and gave it an ultra cool refresh. There was still plenty of life left in the platform after all, considering it experienced its own levels of insane success in its prime.

The PSone was an incredibly nice-looking machine that kept many of the basic design elements that made the original such an iconic design, except now everything was smaller and more high tech looking than ever before.

What really set this one apart though was an officially licensed add on LCD screen. It was a bit on the expensive side, but this basically made the PSone portable to a degree. In practice you couldn’t exactly put it in your pocket and take it on the bus, but you could say, take it to a room in your house that didn’t have a TV and get some Tony Hawk Pro Skater in if you wanted.

It was sort of obnoxious that they changed the power cable, but all in all that’s a small gripe for such a cool product. 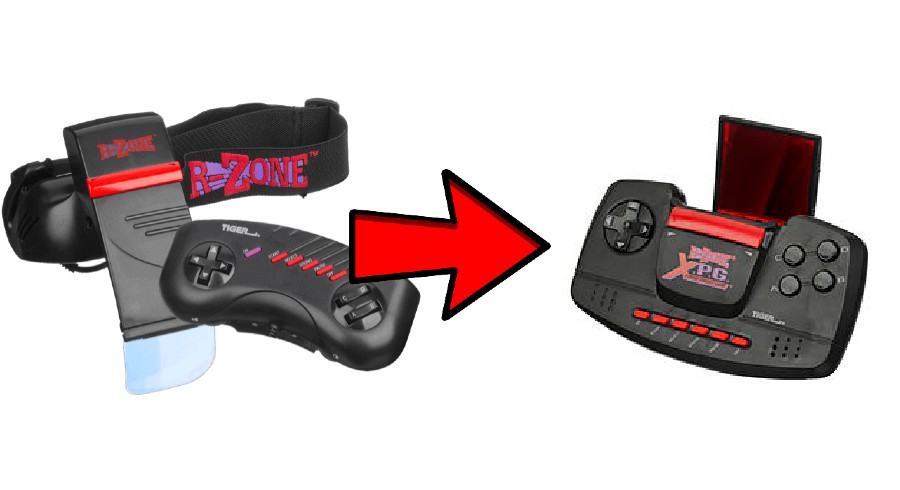 The Tiger R-Zone was kind of a bad idea from the get go. It’s almost as if Tiger saw the Virtual Boy and said “yeah, let’s make one of those!” Except instead of playing regular games, it exclusively played those crummy Tiger LCD games, and only in red, and only on a tiny screen that you strapped to your head.

Unlike Nintendo though, Tiger didn’t let this particular technology fall to the wayside. Instead, once it failed to catch on, they took the whole thing and made it considerably less insane by turning it into a more traditional handheld.

Sure, you were still limited to the same little LCD games you were before, but now you could see what you were doing, so what little fun there was to be had in those games was way easier to experience.

What’s neat about this is that they really made this work. The original carts for R-Zone actually had small screens in them that the system would shine light through to display the games themselves. It’s all as bananas as it sounds. But taking that tech that was so clearly designed for a very specific purpose and making it into something that functions on a more traditional level is pretty impressive.

They actually revised R-Zone tech a bunch of times. There’s a shocking number of R-Zones out there. Honestly, I really wish Nintendo would have done something like this with their Virtual boy back in the day. They might have been able to find a way to salvage the disaster that was that poor red and black console, and even get the platform’s mostly solid library into more hands. Oh well, at least we have this. 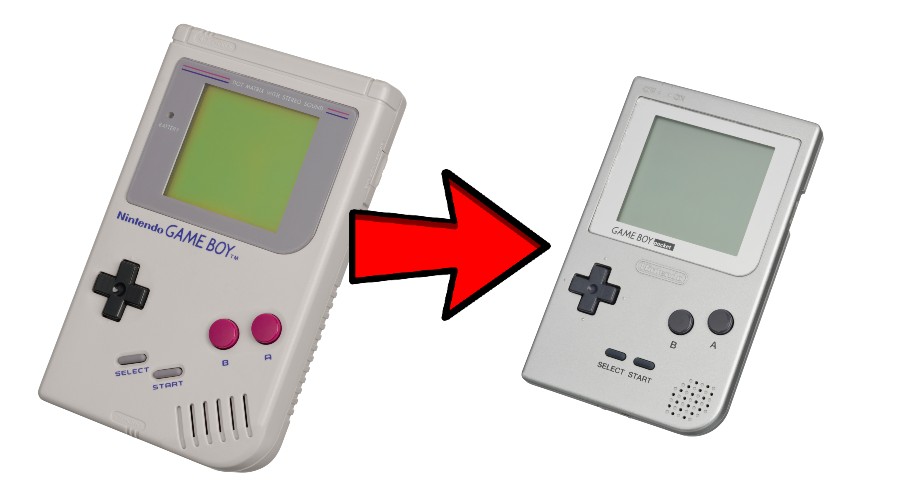 Where Nintendo let the Virtual Boy falter, the same can’t be said for their ultra successful Game Boy line, especially when they took their original beast and made it infinitely better. The OG model felt positively ancient by 1996. That dot matrix screen and solid brick design got a slight refresh in the form of different colored system shells, but even though it absolutely trounced its competition, the shadow of what the Lynx and Game Gear offered loomed large. Full color backlit screens were what people wanted, and they wanted it from Nintendo.

In a move that feels hilariously familiar given our current Switch OLED circumstances, Nintendo released the Game Boy Pocket. It didn’t feature a full color screen, nor did it have a backlight, or offer any sort of power upgrade. It did have plenty of other things going for it though.

For one, it was smaller. Way smaller. This would easily fit in just about any pocket, and it did so without sacrificing comfort or screen size. Speaking of the screen, that had been improved from the old dot matrix relic to a snazzy LCD. With better contrast and a lack of that creamed spinach color, all your Game Boy games looked better than ever.

Even more impressive was the battery situation. While the original Game boy was lauded for lasting a pretty long time on just 4 AAs, the Game Boy Pocket boasted an even longer life on a paltry 2 AAA batteries. Not only was that a massive improvement over the original Game Boy, but it put battery guzzlers like the Game Gear to shame.

It would be another couple of years before Game Boy got its color screen, and a borderline embarrassing amount of time for the line to get its first light up option, but for what it was, the Game Boy Pocket was a great little unit.

So, what’s next in terms of hardware revisions for the game industry? Who knows? I personally can’t wait for Sony to make a PS5 that doesn’t look quite so insane, and maybe the Switch Pro will happen one of these days. In the meantime, I'll continue to enjoy looking back on old hardware revisions because, well, they're just fascinating!