Donkey Kong Country 3: Dixie Kong’s Double Trouble is something of a divisive game. There are lots of folks out there who laud its new additions to the franchise and feel that it’s every bit as good as its predecessors.

I am not one of those people.

The original Donkey Kong Country was nothing short of a revelation to me, and its sequel Diddy’s Kong Quest was a fantastic followup despite the lack of, you know, Donkey Kong in the brand new Donkey Kong game. The third installment though never quite clicked with me. Where the first game offered incredibly responsive controls, DKC2 introduced some small hiccups to the overall flow that sort of drove me crazy. The slight delay of firing when you shot out of a barrel cannon, the big splash screen that explains what the bonus area you just entered was, and of course there were the new added layers of collect-a-thon that made progress seem to grind to a halt. Small stuff like that was all over the game, but it was still subtle enough that it didn’t ruin my overall experience. The art direction was still as strong as ever, the music was still engrossing, and the game was still overall fun to play.

Donkey Kong Country 3 though, took the things I didn’t like about DKC2 and expanded on them greatly. Everything felt even slower and stilted than before, the music was nowhere near the caliber of the games that came before it, and the art direction went completely off the rails with tons of boring characters showing up everywhere, redesigned Kremlings that looks just sort of wrong, those grotesque Banana Birds, and of course this… thing… 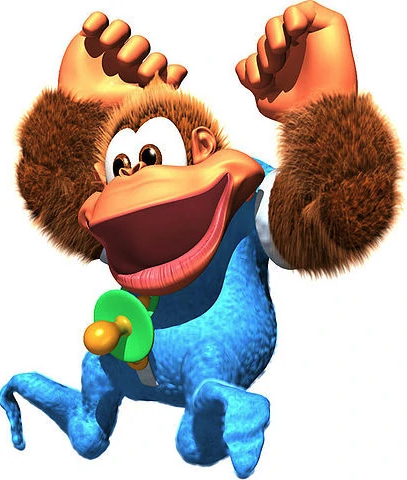 The levels themselves seemed sort of neat, but everything else surrounding them turned me off right quick, and I never got around to putting any serious effort into the game because of it.

However, with the franchise’s 40th anniversary recently, I wound up looking through my collection and I came across some weird information about the Game Boy Advance port. Most notably, how it’s a surprisingly different game.

I’m not saying it has all new levels or anything. Well, it actually does feature a couple of exclusive stages, but on paper this is largely the same game as its SNES counterpart. I ignored it when it first released for a couple of reasons. First, it’s Donkey Kong Country 3. Why would I want to play that again? Second, it looks even worse than the SNES original. I played some of the previous two GBA ports of the Donkey Kong Country games and I absolutely hated them. They just looked so garish. I love the look of the originals, but these new versions looked brutally ugly by comparison. I understand why, what with the GBA’s screen not being backlit and all that, but still, eww. Gross.

So playing an uglier version of a game I don’t like in the first place on a tiny GBA screen was a losing proposition right out of the gate. But there’s more to this port than meets the eye.

First and foremost, there’s an entirely new soundtrack. I have no earthly idea why this happened, but when it came time to create this port, the folks at Nintendo decided to hire David Wise, the man behind many of the first game’s best music tracks, and the guy responsible for the entirety of the second game’s score, to come back and create a whole new soundtrack for Donkey Kong Country 3.

The original game’s soundtrack was composed by Eveline Novakovic, previously Eveline Fisher, who worked with Wise on the first game’s soundtrack. She wrote some of that game’s more ambient sounding tunes like Forest Frenzy and Voices of the Temple. She also wrote the infinitely memorable Simian Segue, the franchise’s often reprised Map Screen music, so hiring her for the job of scoring an entire Donkey Kong Country game must have seemed like a no brainer. In fact, she’s worked on a bunch of great stuff over the years, but for whatever reason, the music she churned out for DKC3 just didn’t work for me, and clearly I wasn’t alone.

There was something uniquely not fun about the tunes in DKC3, and it affected the tone of the entire game.

This new soundtrack by Wise though, it changes the entire feel of the game. Like his work in Donkey Kong Country 2, the music matches the light hearted tone in stages where it makes sense, and brings the atmosphere where it doesn’t. No, it doesn’t change the game on a base level, but it really does make it more fun to play.

While it absolutely still holds true that the Game Boy Advance version is uglier than the SNES one overall, they did make some genuine improvements in the visuals department, including a ton of brand new assets.

Most notably, the entire map has been remade. Everything is still more or less in the same place, but the camera is pulled in a lot more and it honestly looks way better. DKC3 famously offered a lot more control over your characters on the map than in previous entries, and this new perspective doesn’t just look nice, but it makes traversal simply more fun.

There were even characters that got new looks, like the Brothers Bear. These guys looked like drunken idiots in the original game, but now they look like, well, cartoon bears. Not exactly inspired design here either, but it’s still a vast improvement.

In what’s probably the craziest thing of all to me is that they included a bunch of extra minigames at the end of the game. I had heard this back when it was released I’m sure, but I promptly forgot about it because honestly, who cares? It’s bonus minigames on the GBA, that happens all the time. But if I had known THIS was what the minigames were, I would have for sure spent some time trying to unlock them. I still can’t even believe this myself, but the minigames are Cobra Triangle for NES. But they’re all Donkey Konged out. Look at this. That’s Race to the Finish, Dispose of Mines, and Guard the People. They don’t make any mention of Cobra Triangle in the game itself, nor have I ever heard anyone make this connection before, but these minigames are literally Cobra Triangle, and that’s, for lack of a better term, completely bananas.

It gets weirder though. Remember when I mentioned David Wise earlier? Well, he just so happened to have also been the composer for the Cobra Triangle soundtrack, which absolutely rules by the way. But did he reprise any of those tunes for this game’s bonus games? Nope. They all share the same track, and it isn’t anywhere near as cool as anything heard in Cobra Triangle.

It begs the question, why go so far as to literally recreate aspects of Cobra Triangle in this game with the original composer on board and not reuse those fantastic tracks to tie it in? Insanity.

So yeah, this is one of the most bizarre port jobs I’ve ever seen, and while it’s incredibly interesting, I still can’t bring myself to play it. I’m more tempted to do so than I’ve ever been before though, so that has to count for something, right?