An organizational descent into madness

Okay, now that I have the shelves, it’s time to decide exactly what the heck I’m going to do with them. I’ve been collecting since I was a kid, so my collection is kind of massive, and while you can fit quite a sizable number of games on 3 full size Billy bookshelves, they’re still nowhere near big enough to fit my entire collection. So it’s time to start paring things down a bit.

When I say paring down, I don’t necessarily mean getting rid of stuff. I mean, what’s going to be out on display, and what’s going to stay in the closet. What I ultimately decided on was some sort of combination of what’s most attractive and what I like the best.

I have a lot more loose games than I do boxed ones, but if I’m being honest with myself, it’s the boxed stuff that’s the most fun for me to look at. As much as I’d love to have a proper lineup of my NES carts, I love the presentation of the boxed stuff just a bit more, and like I said last time, keeping the shelves all level with one another is key, so if I’m putting boxed Saturn games on a shelf, loose Atari 2600 carts just aren’t going to work, not without looking jumbled.

And this is the biggest factor that I had to make myself keep taking into account. I don’t want this to just look like a set of shelves lined with as many games as would fit. I want this to be a bold, uniform presentation. So I started in the easiest place I could think of: Sega.

I'm a Nintendo guy through and through, but one area where Sega absolutely blows them away is in the packaging department… Well, eventually anyway. With so many of their games looking fantastically uniform, getting those shelves together was a pretty fun warmup.

I started at the top with Sega Master System. I’ve always liked this platform, but there’s no denying their box art is horrendous. Still, it’s not an awful look when they’re all lined up, and I can never overstate just how much better those hard plastic cases were than Nintendo’s flimsy cardboard. So I went to my SMS box and took out all my favorite titles. Since they’re all uniform with the exception of Rampage which is inexplicably red, this one should have been easy. Except, upon further inspection, they aren’t all uniform! 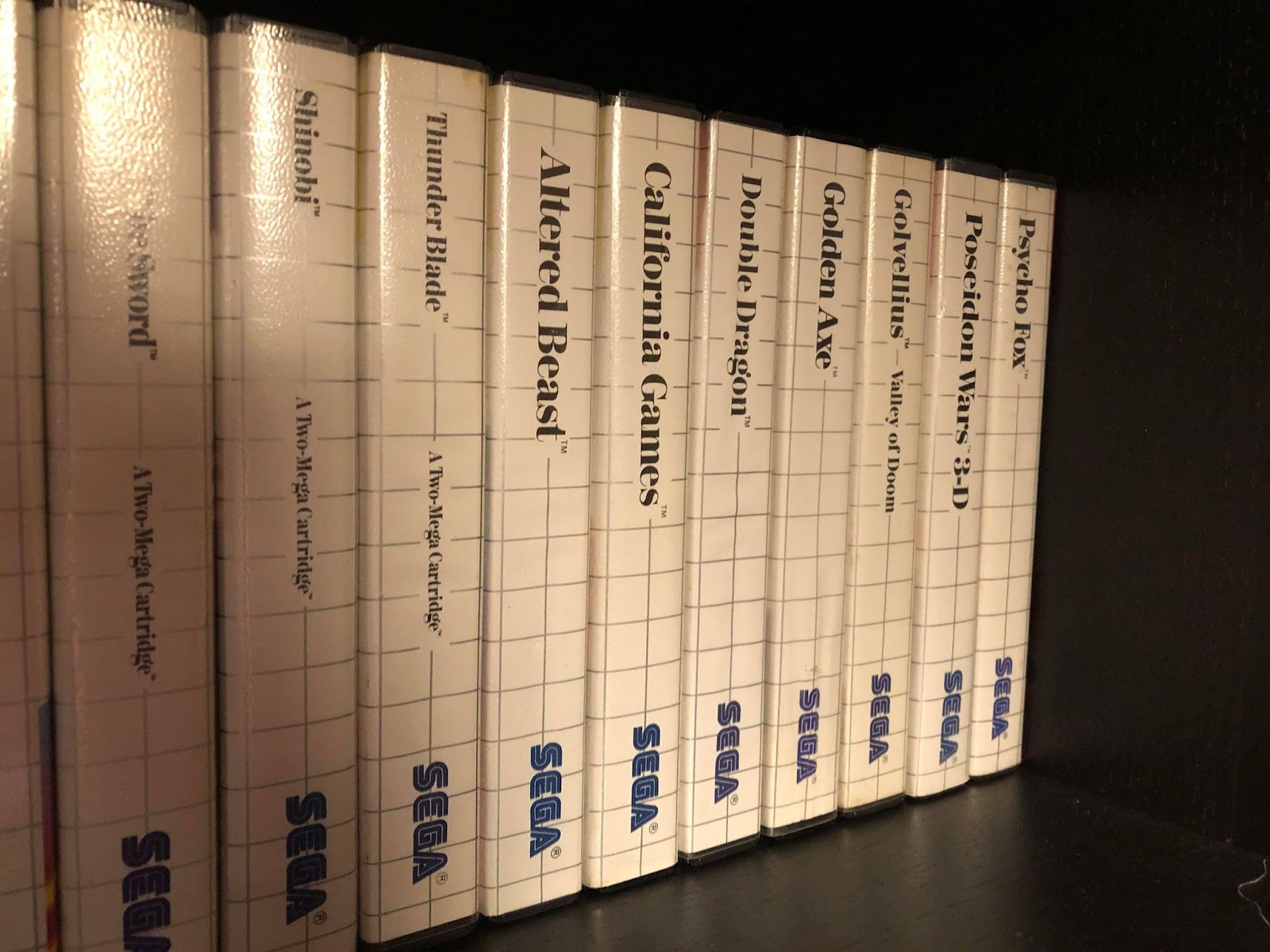 Turns out there are a couple of different flavors going on here. Later games were easy to spot, like my copy of Strider which actually features the game’s logo on the spine. A neat look, but it sticks out like a sore thumb on the shelf, so into the closet it goes until I manage to get my hands on some stuff like Sonic, Master of Darkness, Ninja Gaiden, etc.

But there was another wrinkle too. It seems that at some point Sega started making the titles bolder on the spine. Mixing them in by straight alphabetizing just looked uneven, so I decided to separate them out and alphabetize them within their own little sub categories. I think it looks pretty nice.

The trouble being that while this shelf is nice and organized now, it’s still pretty bland. Hopefully my amiibo plan will help with that later.

Welcome to the Next Level of Organization

Next up is Sega Genesis, and this was the one I was really excited for. When the Genesis launched, its box style matched the Master System, albeit in a WAY more stylish way. So My plan was to grab all my black grid Genesis games and have a full shelf of just that, with a couple of my other favorites that don’t really match thrown at the end for good measure.

Once I had that set though, it became painfully obvious to me that putting those other titles at the end absolutely ruins the display. So as much as I love Rocket Knight Adventures, Blaster Master 2, and MUSHA, back in the closet they go.

This kind of killed me, weirdly enough just because of Blaster Master 2. I’m a tremendous Blaster Master fan, and coming so close to having the whole franchise on display easily withing reach is a delight I’ve been looking forward to for a very long time. But that bright green box next to all the other stuff is just an eyesore. I’m looking into getting some custom art for the game with the red stripe spine, but I haven’t had any luck thus far.

Anyway, also similar to the Master System, I didn’t realize that Sega made several revisions to their black grid box style. So in keeping with the pattern, I separated them out by style with the small Genesis logos on the left, the big ones in the middle, and the barcodes on the right.

Yes, it bugs me to not have Sonic 1 and 2 next to one another, but I can’t argue with the end result. This is a really pretty shelf. 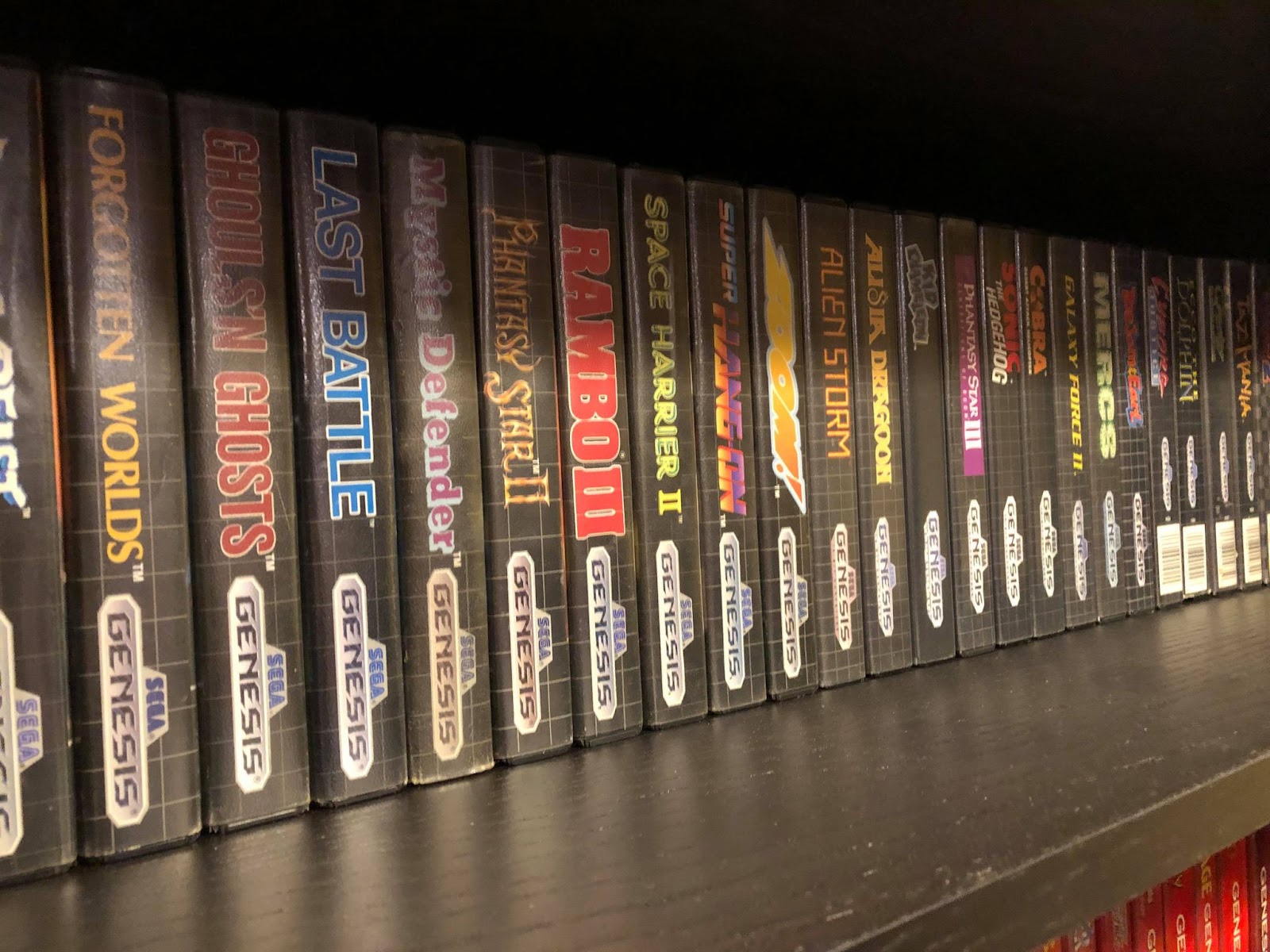 Next came the red striped Genesis games. These are my favorite. I LOVE this whole design aesthetic Sega went with, especially how it carried from system to system. The red on genesis, blue on Sega CD, white on Saturn, purple on Game Gear, and yellow on 32X was just the slickest darn thing. I knew I was going to have to make some sacrifices here because I have a metric ton of Genesis games and only so much space, but as this is all about making it look pretty, I figured the best move was to get red striped stuff most of he way across and toss a few 32X games at the end, but unfortunately… 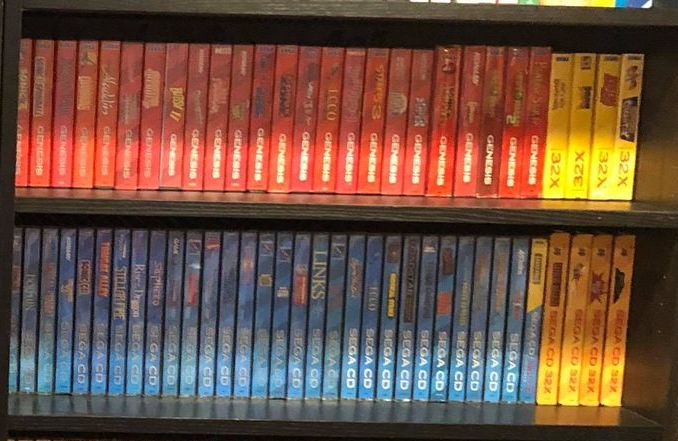 I hated it. No matter how I looked at it, those few yellow games at the end really threw off the flow of the rest of the shelf, (not to mention the 32X logo on Doom is upside down!) and I didn’t have nearly enough 32X games to dedicate an entire row to (nor did I have the space considering how many other platforms I still had to represent.)

The Sega CD shelf came to the rescue a bit though. While Knuckles Chaotix and the kick ass port of After Burner had to go back in the closet, Fahrenheit worked as a great little bridge with the half yellow spine so I could put the Sega CD/32X titles at the end of that row and still have some of that sweet yellow spine design without breaking the overall aesthetic.

Don’t get me wrong, I’d much rather pay Doom on 32X than Slam City featuring Scottie Pippen on Sega CD, but the presentation is just so much cleaner this way.

I did notice that the Sega CD games had a weird thing with the Sega CD logo itself, where some of them are stark white and others are gray, so I sectioned them off separately and it looks rather nice.

The only problem I had with Saturn was deciding which games to keep and which games went into storage. I have a pretty beefy Saturn collection, and these cases take up some serious space. But man, do these games ever look nice lined up. Saturn is so darn cool. 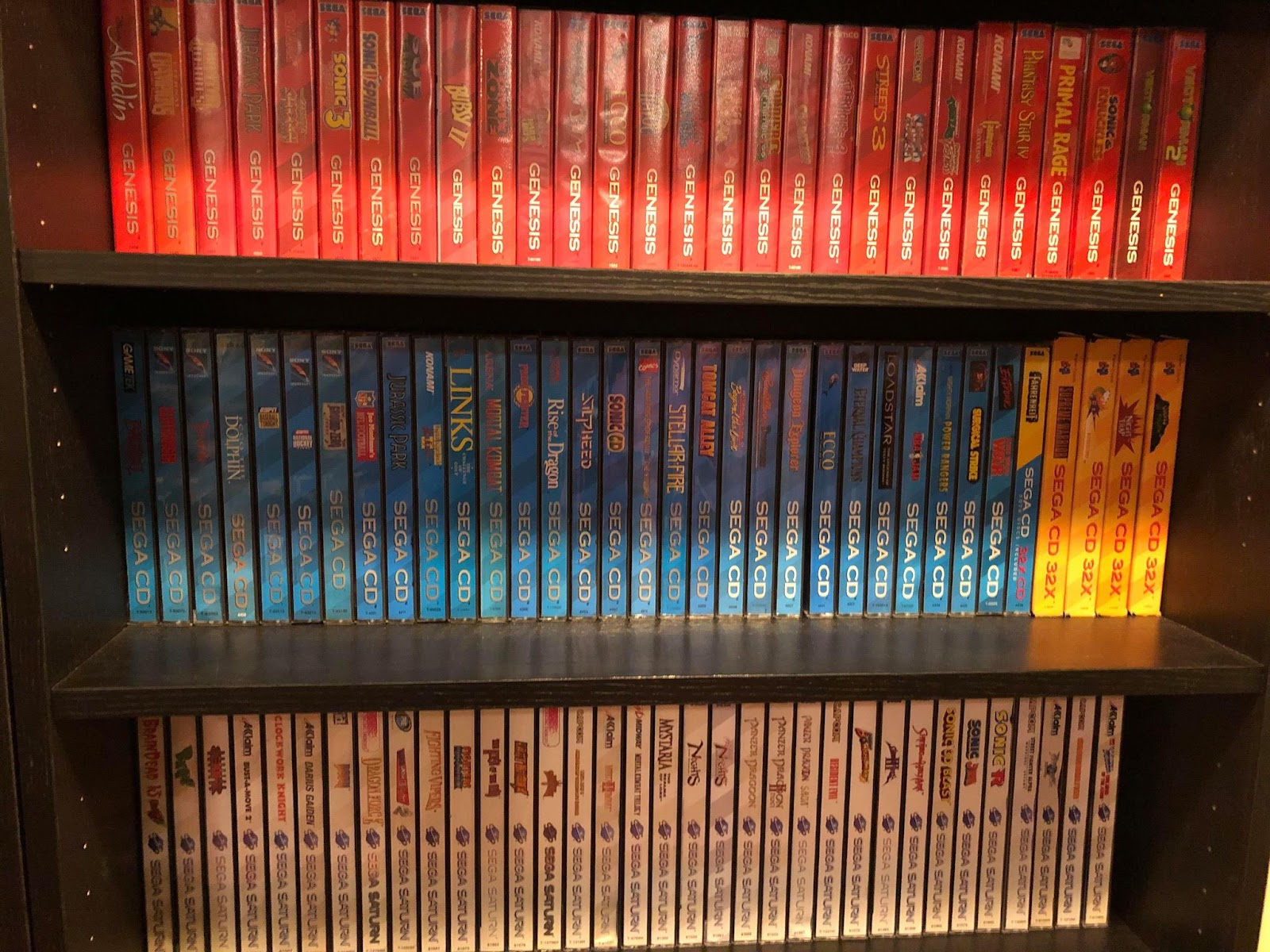 All that leaves in terms of Sega stuff is Game Gear and Dreamcast. I experimented a little with putting CD jewel cases on these shelves, but it just doesn’t look great. They’re too darn short, and I just don’t have enough Dreamcast stuff to make a solid presentation.

I also have maybe 2 whole boxed Game Gear games, so I’m still considering various solutions for my loose Game Gear, Game Boy, Lynx, etc. They’re all in a bin, but it’s a pretty small one. They’re likely to remain there. I just have to figure out exactly where it’s going to go.

Dreamcast though, was going to require a different solution, and one that was also going to have to encompass PlayStation, CD-i, Nintendo DS, PSP, etc. Things are certainly coming together, but there’s still a very long way to go. Next up, seeing what kind of uniformity I can apply to Nintendo.