When the original Nintendo DS was released, times were strange. It was Nintendo’s first major shakeup system, leading to the insanely successful Wii, the very successful 3DS, and the… well, the Wii U. It was the usher into Nintendo’s non-traditional control scheme world that allowed Wii Sports to successfully dominate the planet for a time. But since it was the beginning, many developers were fairly lost on how to utilize this new dual-screened beast. Within a year or so of the system’s release though, some really creative, brilliant stuff started showing off the potential of dual-screen gaming. Trauma Center reintroduced gamers to the world of surgery simulators. Capcom gave us Phoenix Wright and its warped (yet very entertaining) take on the criminal justice system. Kirby: Canvas Curse gave us a phenomenal platformer controlled exclusively with a touch screen. And WarioWare: Touched was simply genius.

Those games are all fondly remembered. People still bring them up in conversation as great examples of what made the DS so special. But there were some other early DS games that seem to have failed to impress the world as much as they did me. One of those games is Dig Dug: Digging Strike, and really, more people should love this game. 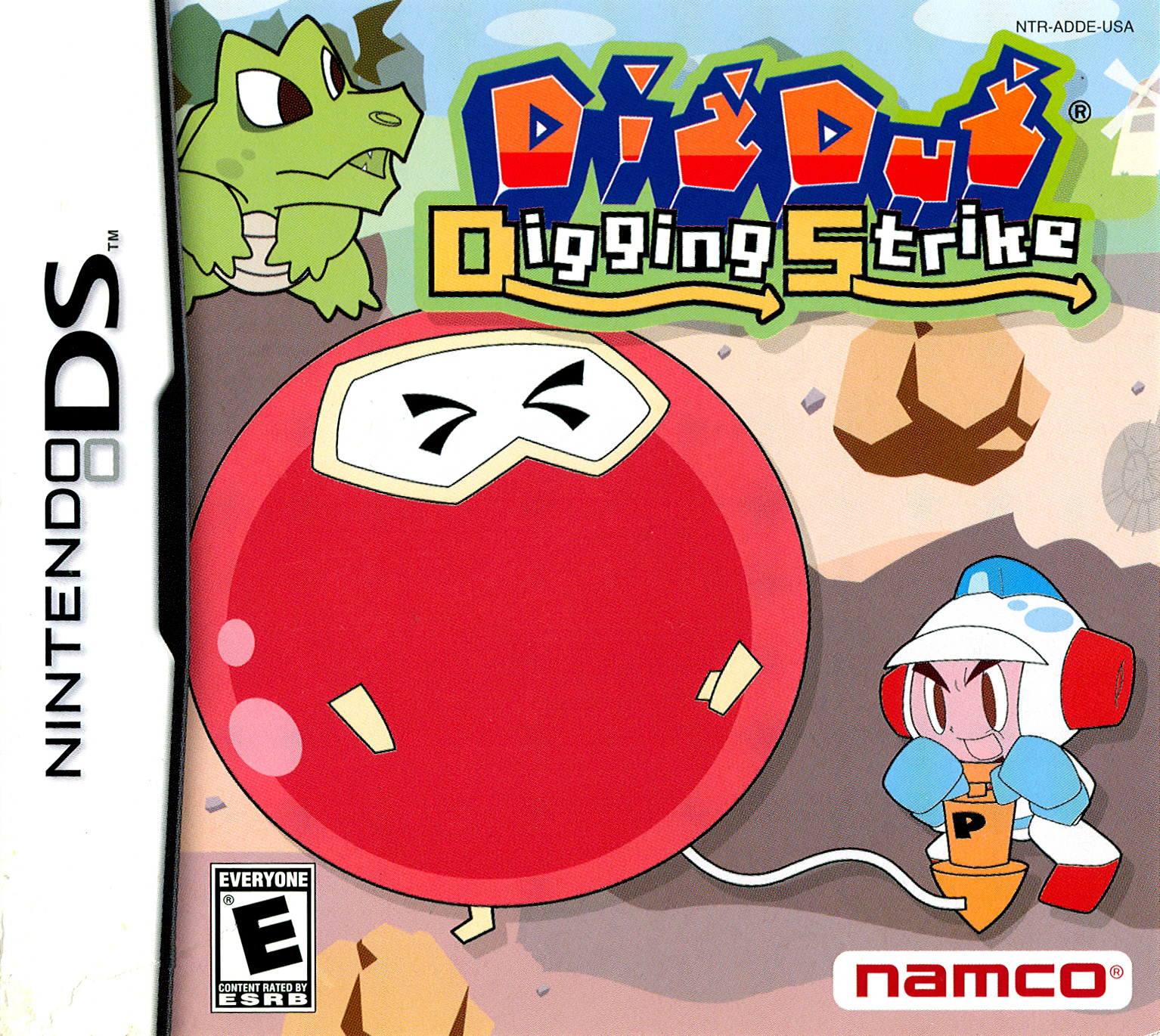 The original Dig Dug was a pretty big arcade hit back in 1982. If for some reason you’re unfamiliar, the game is about a little dude with an air pump blowing up monsters while digging tunnels, avoiding falling rocks, and making a catchy little ditty play when he walked. It’s super cool, and an absolute blast to play. In 1985, Dig Dug II was hit arcades in Japan. This time, instead of digging around underground, Dig Dug (or Taizo, or whatever you want to call him. I’ll just call him Dig Dug) walked around on an island with a top down perspective. He could still blow up monsters by filling them with air until they pop (really, it’s rather gruesome) but now instead of digging through the ground he could drill entire chunks of the island off so they would fall into the ocean and drown whatever monsters happened to be standing on them. IT was a fun, yet unexpected variation on what made the first game such a success, and while it may not have reached the same level of popularity, it was still quite solid. Dig Dug wouldn’t get himself a new game until 2001’s Dig Dug Deeper for PC, unless you count the Mr. Driller spin-off series, which I don’t. (No offense, they’re lovely games, but they’re kind of their own thing). Dig Dug Deeper played more like a remake of the original  Dig Dug than anything new. Similar to other arcade revivals of the time like Frogger and Missile Command, the concept was to add just enough new to the package to make it look sort of modern, but essentially keep the core game concept the same. Unfortunately in the case of Dig Dug Deeper, it wound up really not being much more than just Dig Dug, which isn’t necessarily a bad thing, but after seeing what Hasbro did with Frogger just a few years prior, this limited of a remake felt pretty hollow. 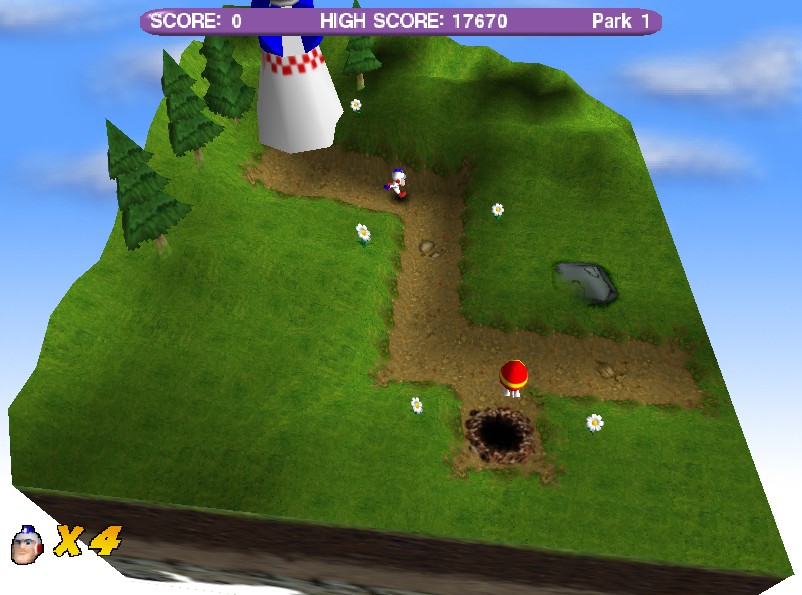 2005’s Dig Dug: Digging Strike, however, is the Dig Dug 3 I was waiting for. What Dig Dug DS (Digging Strike, get it?) successfully does is combine elements from Dig Dug and Dig Dug II to make something that’s familiar and fresh at the same time. Gone are the generic 3D assets of Dig Dug Deeper, and in their place are classic sprites and brilliant bright colors. Basically what they did was put Dig Dug on the bottom screen and Dig Dug II on the top, then have both games run concurrently. There are big monsters on the top screen walking around that Dig Dug can’t defeat with his air pump, but there are also these giant nails sticking out of the ground (for some reason). You have to safely navigate the overworld on the top screen and jump down holes that bring you to the bottom screen where a traditional Dig Dug level awaits. In these levels, you can see the bottom of those giant nails. You have to dig the dirt from underneath them so they drill deeper into the ground, eventually making chunks of the island fall off, hopefully with the giant monsters on them, a-la Dig Dug II. It’s tricky because you have to keep track of what's going on on the top screen and bottom screen at the same time, but it’s super clever and as fun as a Dig Dug game can be. 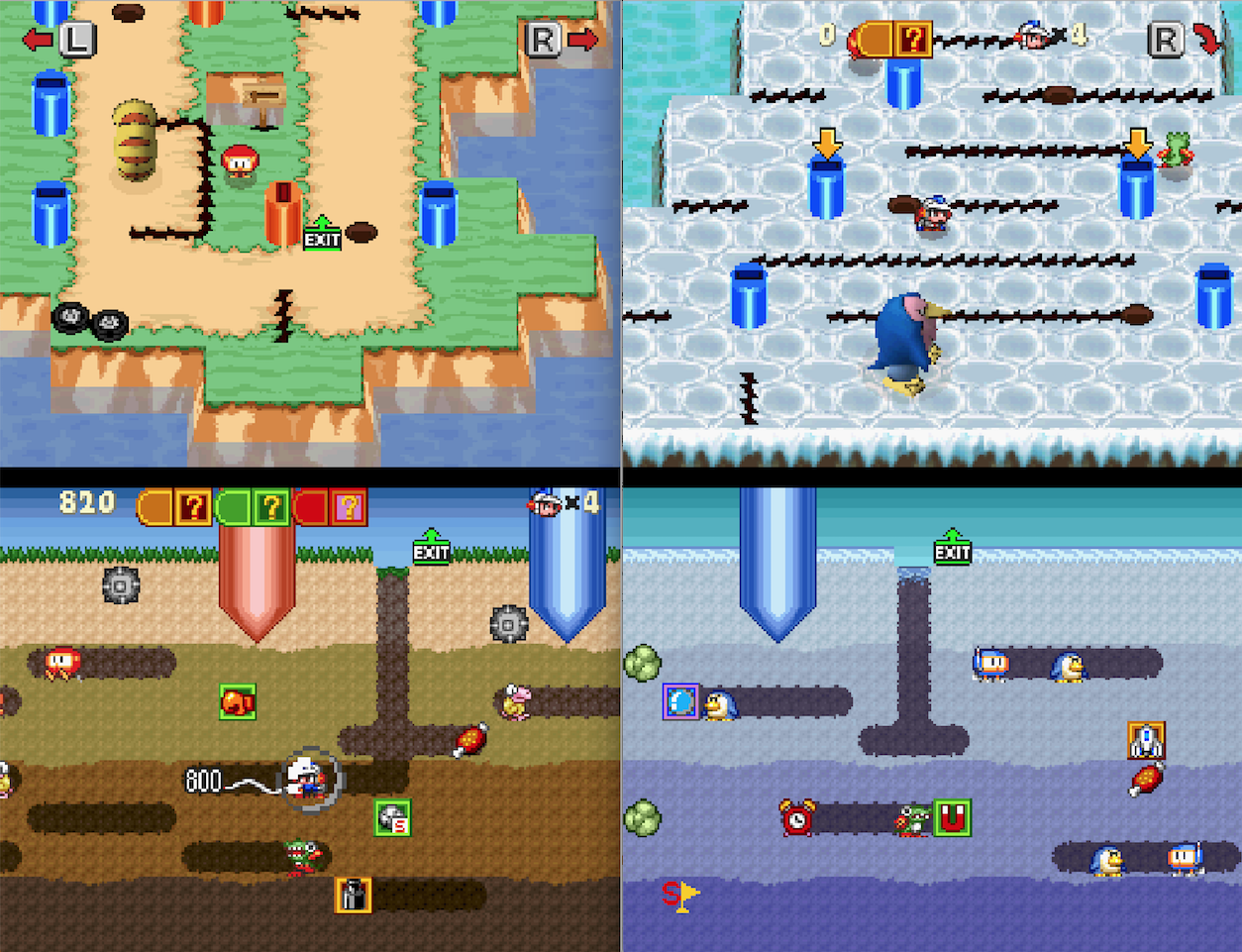 I sang this game’s praises from the mountain tops when it came out. I talked about it to everyone who would listen, but for whatever reason, it never really caught on. People still love Dig Dug, people loved the DS, so what happened here? It’s a complete mystery to me. Regardless, this game is out there and it’s relatively inexpensive. If you have a DS or a 3DS and you love Dig Dug, you owe it to yourself to get it. Hours of digging fun are waiting to be had.