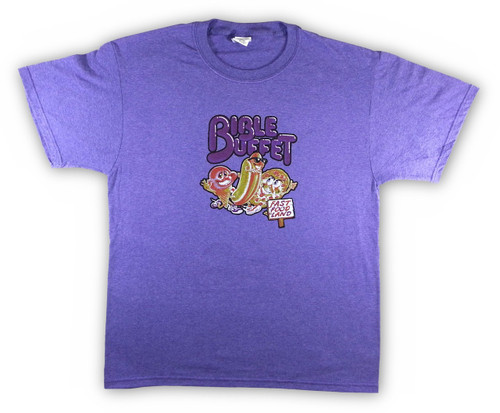 A great conversation starter for retro gamers. Every retro gamer has a Mario t-shirt or a Sonic t-shirt, but not everyone has a Bible Buffet t-shirt.

This is an officially licensed Bible Buffet t-shirt. The silk screen is done in a vintage soft style silk screen and the shirt color is Retro Heather Purple.

Bible Buffet is an unlicensed game created by Wisdom Tree for the Nintendo Entertainment System and released in 1993. It is a single player or multiplayer game. The primary goal is to stop the oil drums and the silverware whose goal is to kill the player. Despite the title, the only reference to the Bible in this game is in the manual on the trivia questions.
Similar to Candy Land, this game has the player spin a spinner to move a specified amount of spaces told by the spinner to move. The regular space is the player's own space, red space indicates another spin, a red circle connected to another red circle has the player move one step forward or backward. If the space has a red circle with a question mark in it, the player can take a pop quiz of three trivia questions and then, if succeeded, gets to select either a key, a heart or move ahead one-four spaces, along with the prize of winning a star. If the player lands on the happy face, something rewarding happens such as moving ahead ten spaces, getting a key, heart etc. If the sad face is landed on, something unrewarding happens, including a loss of a turn, moving back a space, etc. At the end of the game, a bonus is awarded to the player who got to the end first and/or got the most pop quiz stars aside collecting the most food. After that, the entire amount of points is shown to each player.
×
On Sale! Save 47%